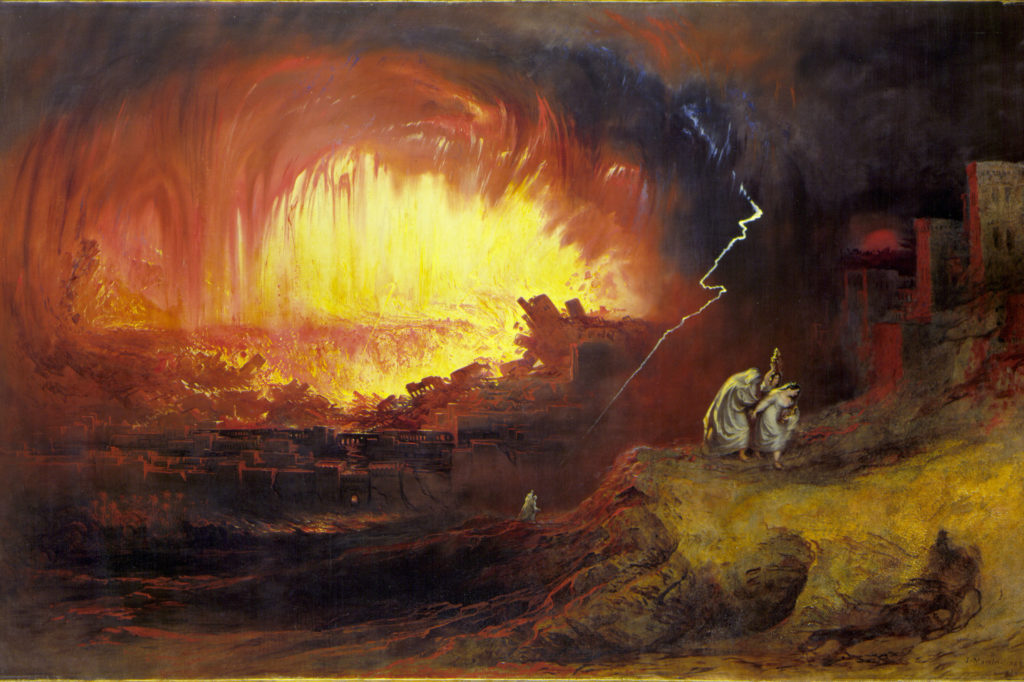 This is a question that participants of The Great Adventure Bible studies frequently ask us, and it’s a tough one to answer. We know that God is all good and all loving. In fact, “God is love” (1 John 4:8). And yet, in the Old Testament, we find various scenes in which God’s people are called to “destroy” other nations. Here’s one example:

“When the LORD your God brings you into the land which you are entering to take possession of it, and clears away many nations before you … and you defeat them; then you must utterly destroy them; you shall make no covenant with them, and show no mercy to them” (Deuteronomy 7:1-2)

Yikes! These do not sound like the words of a God who “is love.” Troublesome passages like this remind us why it is so important to understand how to interpret Scripture “in accordance with the Spirit who inspired it” (see Catechism of the Catholic Church 111-114). Based on this text alone, without proper context, it’s easy to see why someone might think that God commands evil. If we are to understand what is happening here, then we need to keep in mind the following criteria for biblical interpretation:

So if God is good, and it’s never morally acceptable to intentionally destroy an innocent person, how are we to understand this? Consider what St. Augustine said about difficult passages of Scripture:

“… if in the Scriptures I meet anything which seems contrary to truth, I shall not hesitate to conclude either that the text is faulty, or that the translator has not expressed the meaning of the passage, or that I myself do not understand” (St. Augustine, Ep. 82, i. et crebrius alibi).

We know it’s never morally acceptable to intentionally kill innocent persons. We also know that God is all good. So what was God asking Israel to do in this passage? Was he calling them to act in an evil way by killing innocent persons? Two other stories in Scripture should help to answer this question.

In this story, Abraham is like a defense attorney pleading for clemency on behalf of Sodom (a city with some serious problems, as we learn in Genesis 19). Abraham asks God,

Abraham affirms that God is just, and it’s unjust to kill righteous persons. So Abraham asks God if he would spare Sodom if there were fifty, forty, thirty, or ten righteous people in Sodom. In each instance God says that he “will spare the whole place for their sake.” From this we learn that God is indeed just, and he will not kill the innocent. As the Catechism says, “God is infinitely good and all his works are good” (CCC 385). “God is in no way, directly or indirectly, the cause of moral evil” (CCC 311). The interesting thing is that God does end up destroying Sodom in Genesis 19. Does that mean there wasn’t a single righteous person among them? Were there no innocent children? Or is there something more to this scene? Let’s look at our next story and see how it can help explain what might be happening.

The Battle of Jericho (Joshua 6)

Jericho was a city within the Promised Land spoken of in Deuteronomy 7; part of a nation that was to be “utterly destroyed.” In the book of Joshua we see Israel besiege and attack Jericho “putting to the sword all living creatures in the city: men and women, young and old, as well as oxen, sheep and donkeys” (Joshua 6:21). What is happening here? A literalistic interpretation of this passage brings us back to where we started: It would seem God was commanding the death of the innocent, including the young. But is this the only possible way to interpret this text? When we read Scripture, it’s important to distinguish between a literal and a literalistic interpretation of a text. The literalist interprets every word of Scripture as literal, historical truth; and does not distinguish among the various types of writing found in Scripture—including poetry and metaphor.

A literal understanding of Scripture recognizes that “truth is differently presented and expressed in the various types of historical writing” (CCC 110). Is the author of Joshua really intending to say that every single living creature in Jericho was utterly destroyed, including innocent children? The problem with this view is that the story itself has an exception to Jericho’s utter destruction. Rahab and her family are spared (see Joshua 6:25). Is it possible that in these examples the sense of utter destruction was not meant to be understood literally, but was used as an expression? Could this refer to a great—but not total—devastation? We use similar expressions frequently. For example, if I described a comedy I really enjoyed and said “I was dying of laughter,” you wouldn’t begin thinking that I was literally dying. You know that’s just an expression for how funny something was. So too, the idea that “every living creature” in Jericho was killed is quite possibly just an expression.

What’s Deuteronomy Calling Israel to Do?

We know from Abraham’s conversation with God that God does not punish the innocent. So it’s not likely Deuteronomy intended to say that God was commanding the death of everyone. In fact, Deuteronomy goes on to say, “You shall not make marriages with them, giving your daughters to their sons or taking their daughters for your sons” (Deuteronomy 7:3). Why would Deuteronomy need to forbid intermarriage with these nations if they were to be utterly destroyed? There would be no one left to marry among them. It’s more likely that the phrase “utterly destroy” was used as an expression.

Perhaps it was intended to describe a complete victory for Israel; a victory that meant separating themselves from anything that might get in the way of their relationship with God. Actually, that’s the reason Deuteronomy gives for this command, “For [the nations] would turn your sons from following me to serving other gods, and then the anger of the LORD would flare up against you and he would quickly destroy you” (Deuteronomy 7:4). This interpretation would mean that God did not command evil. Rather he commanded Israel to avoid evil by removing those temptations that might lead them astray. Christ uses a similar expression in the New Testament to describe avoiding sin:

Christ is not speaking literally. He’s using an expression to illustrate the severity of what he is saying. So the lesson here is, don’t literally cut off your hand, pluck out your eye, or lay waste to a nation. Instead, remove those things in your life that draw you away from the Lord. It’s better to separate yourself from those things than to find yourself separated from God.

Of course, this is just one explanation. There are many other possible interpretations. What do you think?

This article was originally published on TheCatholicYearofFaith.com in July 2013.

You Don’t Know My Father