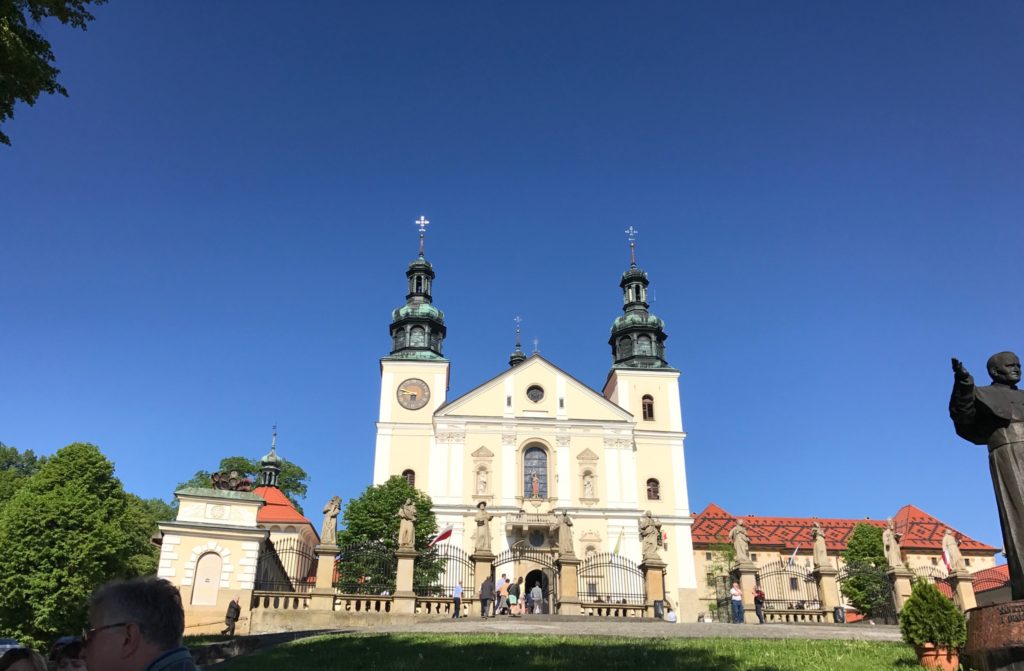 Editor’s Note: Blog contributor Dr. Andrew Swafford recently took a pilgrimage to Poland, where he visited several historic and religious sites revered by Catholics around the world. Here is an account of his experience:

Poland was amazing—it truly surpassed expectations! We had a wonderful group of twenty-three, a combination of young adults, as well as some with a little more life experience. We saw the usual must-see sights in Poland, such as Czestohowa, the famous salt mines which go 1,000 feet below the surface of the earth and which boast beautiful chapels—all carved out of salt, as well as the mountains in Zakopane where Wojtyla frequently took college students hiking.

But in some ways, the heart of the trip was re-living the stories of Sts. John Paul II, Maximillian Kolbe, and Faustina Kowalska. Below are some pictures with explanations of what these sights meant to us, as pilgrims, not just tourists—especially as they pertain to our entering into the great work God wrought in and through these great saints.

In the picture above, on the left is John Paul II’s home parish in Wadowice (pronounced “vadovitseh”); on the right is a building which is now a museum dedicated to John Paul II’s life, but which is built from the apartment in which the young Wojtyla grew up. You’ll notice how close it is to the Church—literally across the street! And from the kitchen window, the young Wojtyla could see this sun dial (pictured below) which reads in Polish: “Time flies [or is running out], eternity awaits.” This gives some sense of the ambience of faith that surrounded the young Wojtyla from childhood on.

The next picture below is of John Paul II relics housed in his home parish in Wadowice. When I first prayed here, I lost it—I just had a rush of emotion, as I said to myself: “I owe virtually everything to this man.” So many of us who had conversions in college and encountered the Lord in a real and personal way have been powerfully impacted by John Paul II—both by his person and his teaching, whether at World Youth Days or his teaching on human sexuality.

The young Wojtyla lost his mother about a month before he turned nine years old. Shortly thereafter his devout father took him to Kalwaria Zebrzydowska (pictured below) which is about ten miles from his home; it includes a stretch of some three or four miles of chapels marking the Way of the Cross and also the path of Mary. The message of the elder Wojtyla to his son was clear: our suffering has meaning as we enter into the Passion of Our Lord and you will always have a mother in Mary. This was a powerful moment in the life of the young Wojtyla.

The next picture below depicts the cell in which St. Faustina died in 1938. I find the geographical and temporal proximity of these saints astounding: this convent is literally a few hundred yards from the chemical factory where the young Wojtyla worked in Krakow during the Nazi occupation; in fact, he used to stop by and pray at this very convent after his work shift—little did he know of course what had been going on behind these walls only a few years prior. Wojtyla would spearhead her canonization cause as Archbishop of Krakow—and when he canonized her in the year 2000, he referred to it as one of the happiest days of his life.

There is a John Paul II museum right near St. Faustina’s convent; and therein is the cassock he was wearing as pope when he was shot on May 13, 1981 (pictured below)—the same day on which the Fatima apparitions began in 1917. As John Paul II famously stated, “One hand fired, another guided the bullet”—since the professional assassin was at point blank range.

The picture below is of St. Stanislaus Kostka, the home parish of Wojtyla and his father when they moved to Krakow in 1938, as Wojtyla began attending the Jagiellonian University. Depicted is Jan Tyranowski, the mystic-tailor who was so instrumental in mentoring the young Wojtyla, introducing him to John of the Cross (the subject of Wojtyla’s first dissertation) and the one who led the Living Rosary groups—groups of young men, of which there were sixty by 1943, ten of whom eventually became priests (including Wojtyla). I’m fascinated by the people behind the scenes that were key to the shaping of St. John Paul II. Tyranowski is now a Servant of God and his remains are encased below his picture.

At this same parish (St. Stanislaus Kostka) are also depicted the Salesians who ran this parish, until many of them were arrested by the Nazis in May of 1941, later to be martyred in concentration camps (in fact, it was this raid that led to the parish relying on lay leadership, especially for youth outreach—into which stepped Jan Tyranowski). Depicted below is Blessed Jozef Kowalski who was arrested during this raid and later died in a concentration camp in 1942: the Nazis demanded that he grind rosary beads with his foot; when he refused, they drowned him in a barrel of feces. He was thirty-one years old when he died. These were the men forming the college-aged Wojtyla in Krakow and who also formed Jan Tyranowski, who became so instrumental in Wojtyla’s life. Wojtyla was one of the greatest saints and human beings ever to grace the planet, but his sword was sharpened by lesser known heroic role models that paved the way.

The next picture below is taken from Auschwitz; it is the back of the cell in which St. Maximillian Kolbe died in 1941. A prisoner had escaped and as punishment ten other prisoners were chosen at random to starve to death. Francis Gajowniczek was one of these chosen ten; but when he pleaded with the officers, saying, “My family—my wife, my children,” Kolbe stepped forward and asked to die in his place. Other prisoners who survived noted how astonishing this was: a prisoner stepped out of line for no reason—let alone to address a German officer unprovoked. The second picture below is a plaque marking approximately at the spot where Kolbe stepped out of line and asked to take Gajowniczek’s place. Gajowniczek spent the rest of his life telling the story of Kolbe’s great sacrifice and lived to attend Kolbe’s canonization. One thing many witnesses note is that Kolbe’s greatness lay not just in his martyrdom, but also in his serene, calm, and brave ministering to the prisoners around him up until his death—singing hymns and leading the Rosary to the very end.

The next picture below is a plaque in St. Anne’s, a collegiate Church right near the university—where Wojtyla as a young priest ministered to college students. The plaque contains the remains of Jerzy Cielieski—one of Wojtyla’s closest friends among these early college students he ministered to beginning in the early 1950s. In fact, Cielieski is the one who taught Wojtyla how to kayak. Cielieski was an engineer who died tragically in a boating accident in the Nile in 1970; Wojtyla was heartbroken. Cielieski was known as an outgoing leader and very committed to the Lord. He, too, is now a Servant of God. Once again the ripple effect of holiness is astounding—so many who formed him (e.g., Jan Tyranowski or Jozef Kowalski), or those whom he formed (e.g., Cielieski) are either Servant of God or beatified!

The next picture below is inside the glorious St. Mary’s, right in the Krakow square. Inside is a confessional where Wojtyla heard confessions daily from 1951 to 1958.

Below is one of my favorite pictures: it depicts Wojtyla as a young priest. It is inside St. Florian’s, another Church near the university. Wojtyla was stationed here in 1949—and in a real sense, here began the makings of a priesthood and pontificate that would transform the second half of the twentieth century. Here, began srodwisko (pronounced “shrodovisko”)—which translates as “environment” or “milieu.” It was the milieu created by the young Wojtyla with these college students—giving them an outlet of truth and authentic fellowship, amidst the dreary propaganda of atheistic communism. This outreach—which took Wojtyla trekking through mountains and rivers with college students (which led to innumerable Catholic marriages along the way!)—was the beginning of St. John Paul II’s signature outreach to young people and even World Youth Day.

Wojtyla learned early that the youth really don’t want a watered-down gospel; and in fact when we water it down, we actually rob them of their chance to be morally heroic. May the spirit and prayers of Wojtyla be with us!

And may the victory of truth and love, which pierced through Nazism and eventually overcame Communism, be an inspiration and a lesson for us today—as we, like the Poles, seek to preserve and pass on an authentic Catholic culture, full of vitality and joy.