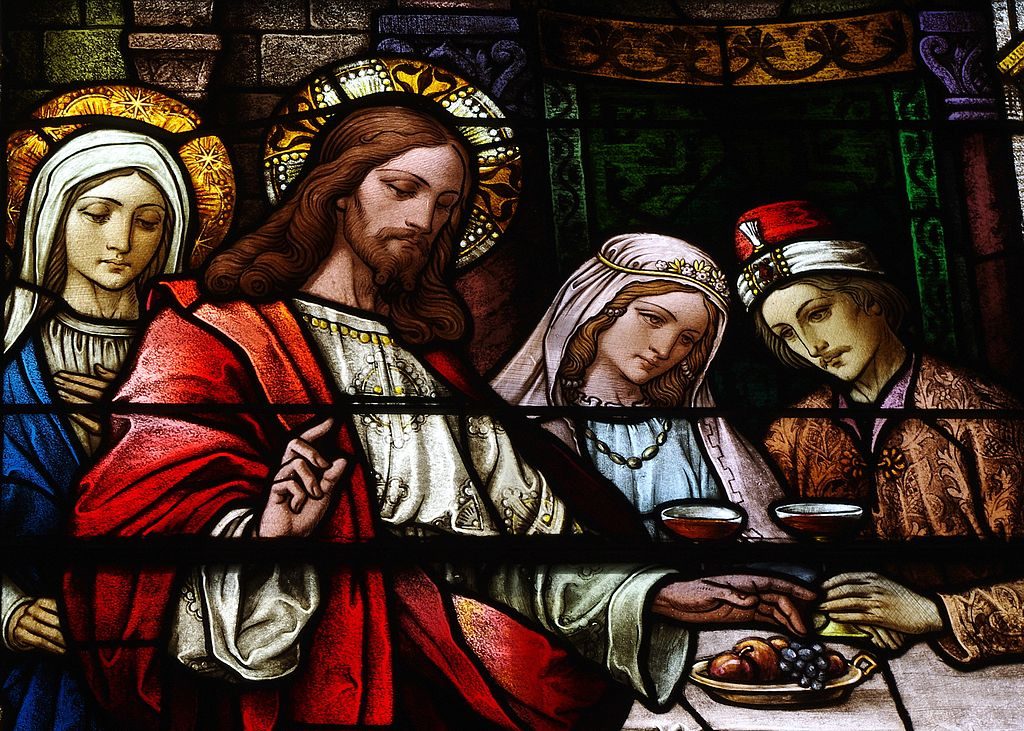 What does it mean to proclaim Mary as the New Eve? Second-century Christian writers readily proclaimed “death through Eve, life through Mary” (Read Sts. Justin Martyr and Irenaeus).

In Genesis 3:15, we have what the tradition has come to know as the protoevangelium (“first gospel”), where God responds to the Serpent, hinting at his first promise of redemption after the fall of Adam and Eve: “I will put enmity between you and the woman and between your seed and her seed; he shall bruise your head and you shall bruise his heel.” This hints at the cosmic struggle that will ensue, resulting in the Serpent’s ultimate defeat through the seed of the Woman—though her seed will also suffer through this victory (“you shall bruise his heel”). The Christian tradition sees this ultimately as a cryptic prophecy of Jesus’ victory over the devil on the Cross.

Eve was created in a state of grace, without sin; if Mary is to exhibit this total “enmity” between her and the Serpent (as mentioned in the above passage), it would seem that her graced state must rise at least to the level of Eve. Here, we can see a hint of Mary’s Immaculate Conception: this is not a doctrine implying Mary does not need a savior, but rather one referring to the unique and special way in which she is saved by her son. Most of us are drowning in sin and Jesus pulls us out; the Immaculate Conception means that Jesus saved her before she fell into sin.

What’s the biblical evidence for seeing Mary as the New Eve?

For the most part, it comes from the writings of St. John—likely not a coincidence since he was the one who took Mary in after Jesus’ death. Surely, John must have asked the Blessed Mother what Jesus was like when he was just two? In other words, it’s not an accident that St. John’s writings give us some of the most exalted theological writing in the New Testament—after all, he was able to contemplate these mysteries with the Blessed Mother by his side.

Let’s begin with the Gospel. John opens with clear allusions to Genesis: “In the beginning was the Word … ” (John 1:1; see Genesis 1:1). John continues to refer to “light” and “life”—again, clear allusions to Genesis 1 (see John 1:4). If we follow the text carefully, John then proceeds to lay out a series of days, using the recurring phrase “the next day.” He does this three times (John 1:29, 35, 43), suggesting a series of four days (the first “next day” would be the second day, then the third, and then the fourth).

In this context, we have a marriage which is said to take place “on the third day” (2:1). Well, the third day from what? Perhaps from the fourth day—in which case the “third day” would be the seventh day. In other words, especially in light of the way John began his Gospel with clear allusions to Genesis 1, he seems here to be subtly setting up a new creation week.

This is the setting for Jesus’ reply to Mary: “Woman … my hour has not yet come” (2:4). Despite the way it sounds to our ears, this is not a disrespectful rebuke for a couple of reasons: (1) Jesus is the God-man—surely he’s not breaking the fourth commandment here; and (2) Mary’s response is itself indicative: she doesn’t cower away, saying, “Gosh, Jesus, do you have to be so mean—in public!” Rather, Mary turns directly to the servants saying, “Do whatever he tells you” (2:5). In other words, Mary’s response suggests an enthusiastic eagerness—as if she’s joyfully saying, “Jesus is going to help us!”

If Jesus is not giving Mary a rebuke, then what’s he doing—and why does John recount the narrative the way he does? Given the Genesis allusions with which John began his Gospel—and then the subtle creation week he develops by recourse to the phrase the “next day” and then the “third day”—it seems that there may be a certain “woman” in my mind, to which Jesus is alluding: “I will put enmity between you and the woman” (Genesis 3:15). In other words, Jesus is proclaiming Mary to be the New Eve—the woman who bears the seed who brings about this ultimate victory (see John 12:31-32).

In fact, John never refers to Mary by name—rather, he always refers to her as “woman” (see John 2:4; 19:26; cf. Revelation 12:1). On the Cross, in John’s Gospel, Jesus looks down and sees his mother and John the beloved disciple and Jesus says: “Woman, behold your son … behold, your mother” (19:26-27). Here, John takes Mary as his spiritual mother, and Mary takes John as her spiritual son.

Why does John call himself the beloved disciple?

Well, are you beloved? Am I beloved? John here sees himself as embodying the relationship granted to all disciples. His taking Mary as his spiritual mother refers not just to him, but to the relationship all Christians now have with the Blessed Mother. In entrusting John and Mary to each other in this way, Jesus has entrusted the Blessed Mother to all of us. Mary becomes our spiritual mother who constantly brings our needs to her son—just as she did at the Wedding at Cana; and she continually says to all of us, just as she did then: “Do whatever he tells you” (2:5). In other words, Mary always takes us to Jesus—the closer we get to her, the closer we get to him.

We have similar material in Revelation 12, where we have a “woman” who is both the mother of the Messiah (see 12:1, 5) and the mother of all Christians—her other children are described as “those who keep the commandments of God and bear testimony to Jesus” (12:17).

The early Church knew that Mary is the New Eve, the new mother of all the living and therefore our mother in Christ. As the early Church Fathers liked to say, Mary is like the moon: she has no light of herself, but she radiantly reflects the light of the sun. This analogy is important because it shows that Mary’s glory is always a participation in that of her son; that is, it’s never in competition with Jesus—it never takes away from Jesus, but only serves to show his power.

Both Eve and Mary were approached by an angel (with Eve, a fallen angel); doubt crept into Eve’s heart, whereas Mary’s faith was steadfast (see Luke 1:45). Eve participated in the downfall of the first Adam, just as Mary participates in the victory of her Son, the New Adam (see Luke 2:34-35). In the words of the early Fathers, “the knot of Eve’s disobedience was untied by Mary’s faith.”

In God’s Providence, it was Mary’s fiat that prepared the way for the new creation, made manifest in Christ’s resurrection. Her “yes”—in one of her great titles—became the “cause of our salvation.” Mary’s fiat became humanity’s yes to the divine wedding proposal.

How can we get closer to Mary, and thereby draw closer to her son? For Mary’s deepest desire is to unite us to her son.

Follow Me: Meeting Jesus in the Gospel of John

The Wonder of Woman
In Revelation, Mary Embodies the Church
The Assumption of Mary: A Sign of Good Things to Come
What We Can Learn from Zechariah's Doubt and Mary's Faith
Has Ascension's free media strengthened your faith?
You can now offer ongoing support for this content with a recurring gift.
Support Ascension