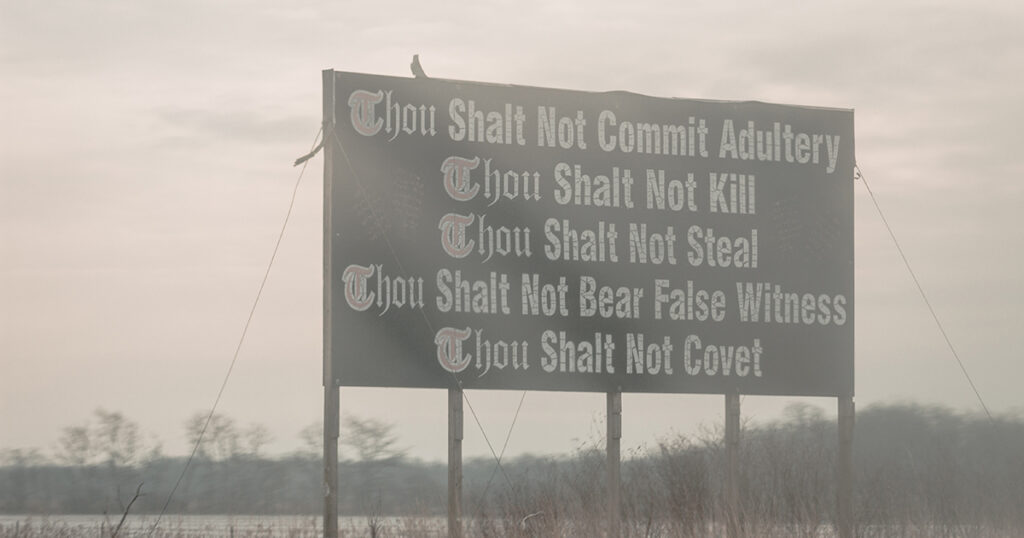 You’ve heard the Ten Commandments before.

You may have even used them as a guide for an examination of conscience before confession.

Often when God gives commands in the Old Testament, he seems very legalistic.

Like he’s an angry man with a beard in the sky who is unreasonably hard on us.

We wonder, Are the Ten Commandments really relevant to our lives? And if so, how?

After you read this article, the fog around the Ten Commandments will lift. You will see their place in the story of salvation and what the language used in Scripture meant to the Israelites.

With this context, you will be able to read this part of Exodus and know exactly how it applies to you.

It’s All About Relationship

The commandments are rooted in the Exodus narrative and must be read in that context. Reading them apart from the narrative often leads to a narrow and legalistic misunderstanding of the Law.

Before Moses receives the Ten Commandments, God frees the Israelites from the Egyptians, leads them through the Red Sea and shows them they belong to him.

Exodus 20:2 precedes the commandments and puts them in the proper context: “I am the LORD your God, who brought you out of the land of Egypt, out of the house of bondage.”

The commandments are given in the context of relationship, only after the Lord has manifested his love by freeing the Israelites from bondage. As the Catechism of the Catholic Church notes,

“The Commandments … come in the second place: they express the implications of belonging to God through the establishment of the covenant.” (CCC 2062)

In first place is the covenant relationship into which God has invited Israelites. Living their lives according to the commandments is simply a response to the love God has already bestowed on them.

For Israel to become a kingdom of priests and administer God’s blessing to all nations, they need to be a holy people. Therefore, God gives them the Ten Commandments, to shape their lives so that they can receive the fullness of God’s blessing and communicate that blessing to others.

Unpacking the Commandments in Context

The first three commandments pertain to the relationship between God and his people and are codifications of the lessons of the Exodus. The first commandment, “You shall have no other gods before me” (Exodus 20:3), gives the great precept of monotheism. The renunciation of all gods but the Lord is at the heart of the conflict between God and Pharaoh.

The second part of this commandment, “You shall not make for yourself a graven image” (Exodus 20:4), is a prohibition against the worship of idols. The Egyptians viewed and worshiped creation as manifesting the divine. The plagues taught Israel that God is distinct from and sovereign over his creation, and he is not to be worshiped in the form of idols.

This raises the question, What idols do we make in our own lives? Where are we tempted to place our identity outside of God? Do we put too much stock in our own abilities, trying to control our circumstances, work, food, or other people?

The second commandment, “You shall not take the name of the LORD your God in vain” (Exodus 20:7), follows the revelation of God’s inmost and most personal name (Exodus 3:14). To invoke God’s name is to invoke his presence, and so God’s name should always be spoken in reverence and love. To invoke God’s name without attending to his presence is to call upon him in vain. Much later, Jewish tradition would guard God’s name with such piety that only the priests in the Temple could pronounce the Name (Yahweh). This tradition recognizes the close connection between presence and name: God could be named only in the Temple, where he was present.

The third command, “Remember the sabbath day, to keep it holy. Six days you shall labor, and do all your work; but the seventh day is a sabbath to the LORD your God” (Exodus 20:8-10), recalls the battle over whom Israel would serve, Pharaoh or Yahweh. Now, after delivering the people from Egypt, God establishes the Sabbath to “let Israel go,” to rest and worship him every week. Thus the Exodus is renewed every week. The Israelites are given six days to do their work, but the seventh day turns God’s people to what is eternal and lasting. A failure to observe the Sabbath, which was ordained from creation, is a refusal to be an Exodus people, a people freed from the world for a relationship with God.

God frees us, just like the Israelites, to rest and not be slaves to our work. Are we living as freed people?

The remaining seven commandments direct the relationships among God’s people. These commandments also contain lessons taken directly from the Exodus narrative. The first is the command to “honor your father and your mother” (Exodus 20:12). Just as Israel is called to honor God their Father (after all, if God can refer to Israel as his “firstborn son,” then God must be Israel’s Father), so too must they honor their fathers and mothers here on earth.

Next is the prohibition against murder. Pharaoh, who was systematically taking the lives of all newborn Hebrew boys, learned well that God alone gives and takes life when, in the tenth plague, all of Egypt’s first-born children died.

These last commandments end with the prohibition against coveting, which was what motivated the Egyptians to enslave the Hebrews and kill their male children.

What This Means for Us

In the Ten Commandments, God is inviting Israel to a life that is different from the Egyptian culture they have just left. He has delivered them and is giving them guidelines to live life fully in relationship with himself and with others.

Each time you read the Ten Commandments, remember how God is leading you as well into a deeper relationship with him and others. He’s not being a dictator. He’s giving us a guide for intimacy with him.