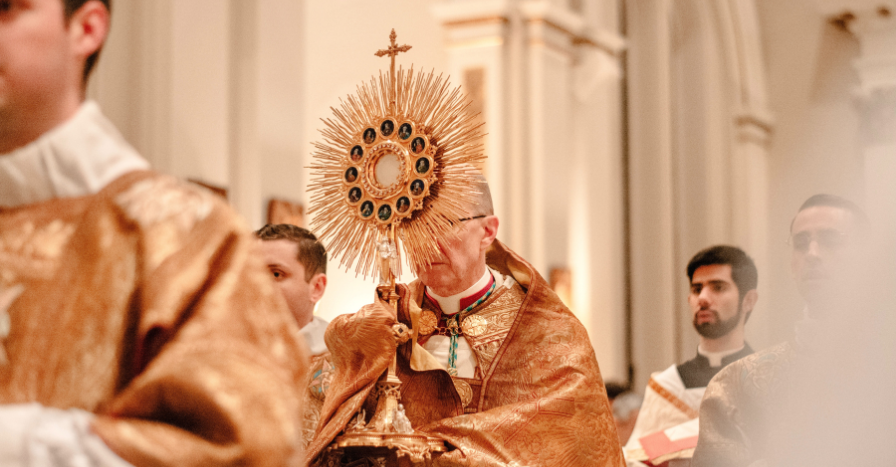 At the beginning of my lessons on the Mass, as a middle school teacher, I always showed the trailer to Altaration by Ascension Press. The video is filmed in slow motion with loud music, soft lighting, strong doses of incense, and a clever use of suspense. After showing the video one year, a student raised her hand and asked me, “Mr. Griffin, why was that video SO dramatic?” Her question was phrased in a tone that portrayed doubt about the importance of what the video pointed to: the Catholic Mass. She was basically saying, “What is the big deal? We know the Eucharist is important, but I mean, c’mon.”

This question spiraled the class discussion to look back at what the class had learned the previous year when we spoke about the connections between the Last Supper and Good Friday. I posed a difficult question from those lessons and announced that the person with the correct answer would receive several pieces of candy from my secret stash. My question was, “What did Jesus really mean when he said, ‘Do this in MEMORY of me?’ Keyword being ‘remember.’” As a minute of silence and pondering passed, I was giving away what the word sounded like,  “Aaaannnn…” when a boy from the back yelled out: “Anamnesis!” I gave a smile that only a teacher would understand and gave him all the candy I had left in my desk drawer.

Then the details began flowing back into their minds as they recalled that Jesus’ words at the Last Supper referred to how he was going to offer his body and blood the next day on the Cross. The word he used for memory does not mean: “I remember what I had for breakfast.” The definition of anamnesis is to make a past event become present now. This is why, as Catholics, we can say that the bread and wine actually become the Body and Blood of Christ. Not because we made it up, but because Jesus said so himself. In his own words, Jesus said that when one of you (the twelve apostles who become priests on Holy Thursday and later ordained other priests) do this, you will make the moment of my offering on the Cross present and real.

Anamnesis provides the details for why the Church has always taught that Christ is not re-sacrificed at each Mass, but that we enter into that one moment in history when he was scourged for our offenses and wounded for our sin. Jesus’ death defeated evil’s strongest consequence, death. Since death is a reality that impacts all people of all times, his victorious suffering stands outside of time. Therefore, at Mass the veil of time is torn open and we kneel in the presence of that divine moment, which conquers what appears to be unconquerable.

My lesson on the reality of the Catholic Mass was always one that I entered into with a certain feeling of pressure and responsibility. Each student’s understanding of encountering the person of Jesus Christ in a profound manner must be at the forefront and foundation of the entire discussion. Once the student realizes the roots and purpose of Christ’s institution of the Holy Sacrifice of the Mass, they also notice that there is literally nothing more intimate, powerful, or life-changing.

However, the elephant in the room was always the fact that I knew, even at a Catholic school, that the vast majority of my students, and fellow teachers, were not attending Mass on Sundays. No one spoke about the topic, but it was clear as day when we attended schoolwide Masses and spoke on the topic. Worship, simply, is not viewed as a priority for parents, nor is it valued as an experience of something divinely profound. Mass is merely an old teaching and requirement that is no longer relevant today because no one appears to attend, relatively speaking.

With virtual Masses being the common experience of the Church recently, how does the power and reality of the Eucharist affect us and how do we understand it? For those who have had the ability of returning to Sunday worship, why does it make a difference that you can receive him again and be physically present at the Holy Sacrifice of the Mass? These current times and circumstances have caused a dramatic decrease in Mass attendance and an exponential increase in virtual Mass attendance. The danger becomes threatening when we mistake the virtual for the real thing.

The Catechism of the Catholic Church says that “the Eucharist is the efficacious sign and sublime cause of that communion in the divine life and that unity of the People of God by which the Church is kept in being. It is the culmination both of God’s action sanctifying the world in Christ and of the worship men offer to Christ and through him to the Father in the Holy Spirit” (1325). For all eternity, the Son offers himself out of infinite love to the Father, through the Holy Spirit, and this is revealed in time, in the flesh and on the Cross. At Mass, we unite our offerings, along with all those in the Church, to Christ’s one, true, and perfect sacrifice and are transformed in the presence of his outstretched arms and outpouring love.

The moment when we walk up to the priest or Eucharistic Minister to receive the Body and Blood of Christ is meant to be like reaching the top of a mountain. We finally made it, to the point in time when we come so close to God that he will actually become a part of us. The location where Christ consumes us in the furnace of his divine love personified on Calvary. The Mass is a representation of Jesus’ passion, death, and resurrection. He does not die again, but we enter into the divine moment of his last breath.

We enter into that one specific place and time when Jesus was hanging on that cross, suffocating, and suffering for you and me. While he was up there all he could do was think about you, and how he is enduring all of this just so that he can have the chance to be with you. As he took his last breath he thought of you: your hopes, your dreams, your fears, and your deepest desires. When we kneel after receiving Holy Communion, we are given the precious opportunity to be with God as he died for us. We can console him, and he will always and absolutely console us.

The reception of the Eucharist takes place under the wood of the Cross. So, make every effort possible to be there for him, for yourself, and for the greatest possible witness of love. Next time you are at Mass, picture that you are there on that gloomy Friday afternoon when Jesus offered his life for the world. Talk to him. It won’t just be a figment of your imagination. You are actually there in that moment.

Don’t pass up the chance to be with him in his last moments and never settle for just the mere memory because Jesus came powerfully in the flesh for a reason, and the Mass is our encounter and reception of God himself.

How to Understand the Cycle of Readings at Mass

Hebrews: An Inside Look at the Mass [Audio]