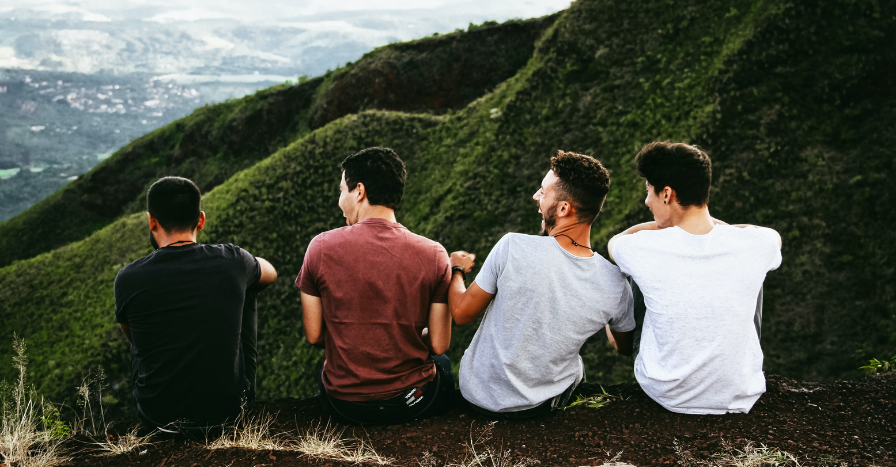 I will never forget the day I received an email from a guy (now in his 60s) saying that all these years he thought he was gay, but recently he came to realize that he simply desired friendship.

I thought to myself, “Wow! His story needs to be shared!”

The Desire for Friendship

Friendship was something he struggled with. Being part of a “wolf-pack” or friend group of men was something that never occurred in his life. His longing to belong and have meaningful friendships with people of the same-sex deepened as he grew up, intensifying as the days, months, and years passed. Those longings for same-sex relationships were natural and good (I am talking here about chaste friendship). But unfortunately, this normal and natural desire was distorted by the culture. As a result, he became convinced that his desires ought to be seen through a romantic and sexual lens.

That is, he began to interpret his natural and good desire for same-sex friendships to mean that his longings to belong with men meant that his desires were in fact desires for romantic/sexual relationships with men. After all, wouldn’t it feel good to be finally chosen? Finally, to be noticed, accepted, and loved? Finally, to be good enough for someone? The answers to those questions, for him, were yes, yes, and yes. With that, he became further convinced by the world that he was gay.

After having a lifetime stolen from him, he finally realized that all he was looking for was a friend. Newfound holy friendships later in life cast a light on this. Today, in his 60s, he is starting anew, radiating the joy that one can only know when self-honesty leads to truth.

Perhaps his story might prevent others from having years of their lives stolen as well.

The Need for Same-Sex Intimacy (Close and Meaningful Relationships)

In both same-sex relationships and same-sex sexual/romantic relationships, a form of intimacy is possible. However, if the relationship is romantic/sexual, a holy (chaste) intimacy is not formed. To determine that which is holy, however, a person needs to understand sin. To help with that, we can look to CCC 1849 to see that sin can be described, in a concrete way, as a rejection of truth. This, however, includes the rejection of the truths written into creation, including the truths that are physiologically authored into our bodies. These truths include that we are created as males or females, and that, regardless of attractions/inclinations experienced, our physiological complement is a person of the opposite sex. To reject those truths is to reject the “successful integration of our sexuality,” and thus is to reject the virtue of chastity itself (see CCC 2337).

Note: While only God can measure anyone’s culpability, and while we can be naive to some things that might be sinful, CCC 1860 clearly does state that “no one is deemed to be ignorant of the principles of the moral law, which are written in the conscience of every man.” Likewise, if we sin without understanding that we are sinning, we are still at the very least committing venial sin, and according to CCC 1862, “Deliberate and unrepented venial sin disposes us little by little to commit mortal sin.” Further, CCC 1865 reminds us that sin clouds our consciences and corrupts the concrete judgment of good and evil. Through this, the falsehood that sin is only something relative to the desires of one’s heart can unfortunately take root. As a result of this taking root, however, people begin to falsely justify their actions as being not sinful at all.  This is a situation that could jeopardize the eternal destination of one’s soul. This is why we need to take the time to understand sin on a deeper level and ask ourselves whether we are placing our own authority above or below the authority of the Church. (I encourage you to click on the above link and spend some time coming to understand the fullness of the teaching of the Church and our responsibility to follow Christ in this area of our lives as in other aspects of our lives and relationships.)

With all of that being said, if we truly love people, we won’t celebrate merely intimacy, but rather only holy intimacy that is honest, mutually respectful, and fully in line with the objective good of the other person as God created them to be. And this is for us to consider regarding all types of relationships, whether they be same-sex or opposite-sex.

The Problem of Absolute Abstinence

Abstaining from same-sex interactions altogether, perhaps to protect oneself from having to face temptation, might sound like a good idea. But doing so will cause a person to become further isolated rather than to grow in authentic friendships with others of the same sex. If we continue along that trajectory, the result could be disastrous—further isolation bringing about a more profound chasm between said person and the same-sex peer group within which they hope to find belonging.

Conversely, if we do pursue purely platonic interaction with persons of the same sex, in other words friendships (within community is always good), we learn that it’s possible for us to be around people of the same-sex and that it’s possible for us to learn and grow from these relationships. As we do this, we become better people, learn new skills, gain new competencies, and therefore also gain new confidence. We can begin to see ourselves less as “below” or “less than” others and more as equals.

A transition like this can renew the soul of anyone, no matter what their confidence level is today, but it doesn’t happen without our cooperation. We have to initiate those sorts of situations, but that will never happen if we are living in fear. Thankfully, only the slightest moment of courage can begin to lift us out of that.

The conversation about sexual attraction as it is can trap people into a too-small way of thinking. If we elevate the conversation into the realm where we can examine whether or not we are developing holy intimacy within holy friendship, then maybe we could transform the face of this discussion for the better.

And if we strive to do that, I wonder how many stolen years in the lives of others could be prevented.

Can I Attend a Same-Sex Wedding? [Jackie and Bobby Video]