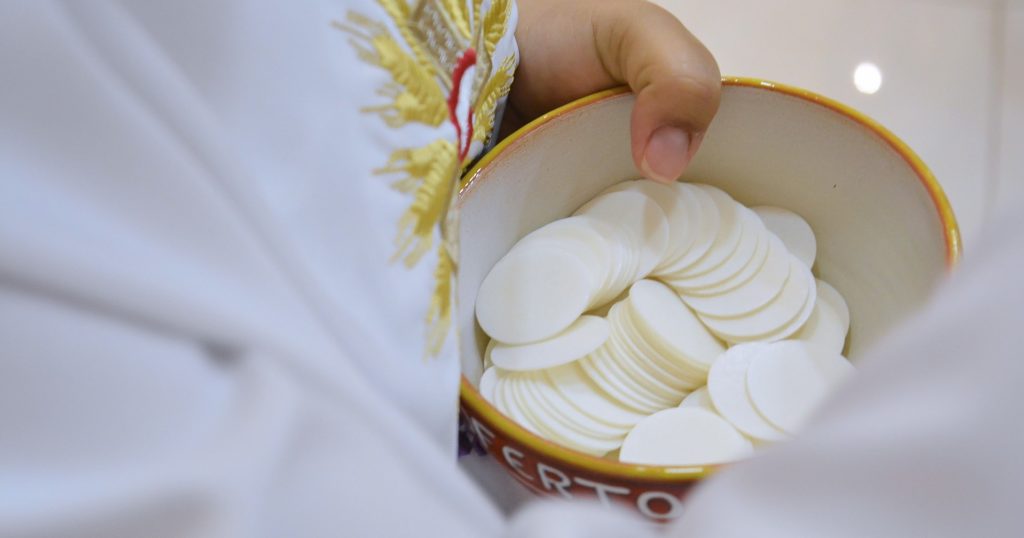 The Bread of Life Discourse (John 6:22-71) is the single greatest teaching regarding the Eucharist that we have from the lips of Jesus himself. As in every passage in the Bible, the context of the passage is crucial. Directly prior to Jesus’ teaching on the Eucharist we have two of the most famous miracles of Christ that are recorded in the Gospels: the multiplication of the loaves (John 6:1-15) and the walking on water (John 6:16-21). Without the details of these two accounts, one cannot come to see the fullness of Christ’s teaching on the Eucharist.

In the first scene, there were huge crowds flocking to see Christ and hear him teach. The day was growing late and Jesus desired for the disciples to feed the crowd. Philip notes that it would take two hundred days’ wages to feed the multitudes, while Andrew brings a boy, his five loaves of bread, and two fish to the attention of Jesus. Now that Christ has been given this small offering from the people, he immediately says, “have the people recline” (John 6:10). He did not answer Andrew or Philip, and he did not strike up a conversation with the boy or anyone else for that matter; he merely directed the crowds to be seated.

With the little that has been given, Jesus ensured that the crowds had more than they could ever need. He gave thanks (prayed) over the loaves and fish, multiplied them, and directed the disciples to distribute them to the crowd (John 6:11). There were baskets of fish and bread left over (John 6:13).

The first lesson from Christ on the Eucharist is that, even if all we have is a small offering, like the boy with just a few loaves and fish, Jesus will make it more than enough by his mercy, love, and compassion. The Eucharist involves Christ’s sacrifice on the Cross, but also calls forth some form of sacrifice from us.

After he multiplied the loaves and fish, the crowds began to hail Jesus as a prophet; they were convinced that he was going to be their king. Christ noticed the demeanor of the crowd and he recognized that their praise toward him revolved around human power and strength, not the wisdom of God. He disappeared, ascending up the mountain by himself to pray (John 6:15). While he was on the mountain, the disciples climbed into a boat and headed out on the Sea of Galilee. While they were at sea, a strong storm struck and the boat was in danger of sinking.

Few note the fact that the landscape of the Sea of Galilee is surrounded by mountains in certain locations. While the storm is sending waves crashing overboard onto the disciples’ boat, Christ is on the mountain and is overlooking the sea. He knew they were in danger, so he made his way toward them:

“They saw Jesus walking on the sea.”

Before they can speak, Christ tells them to not be afraid. “Be not afraid” is a common way for God to greet people in Scripture, and it implies they are in God’s presence and in awe of the power they are witnessing.

Thus, the second lesson from Christ on the Eucharist is that when we are in need we must trust in God’s never-failing presence and power that will calm every storm in our lives, even when it appears like God is absent. The Eucharist is the source of all grace, the mercy seat of the Son, and the place where we come face-to-face with the one whose love burns away all fear.

Lesson Three: No Eucharist, No Life

Once they return to shore, they are met by more crowds who desire to ask Jesus the all-important question regarding accomplishing God’s work. Jesus responds with a reference to bread (the manna in the desert) and claims that he is the Bread of Life; that the true accomplishment of God’s work is to receive his Flesh and Blood (John 6:31, 35). Reception of the Bread of Life brings life without end, and unites us to the one who has no beginning or end:

“This is the bread that comes down from heaven so that one may eat it and not die.”

The third lesson from Christ on the Eucharist is that—if we are to follow Christ—not receiving him is not an option, and our reception of the one that came down from heaven brings us into direct contact with the eternal life offered to us.

Lesson Four: The Eucharist Will Cause Division

The people surrounding Jesus during his lecture on the Eucharist continue to ask several questions because they cannot understand how he can be speaking literally. And yet, he refers to himself as the Bread of Life several times while clearly stating:

“my flesh is true food, and my blood is true drink.”

The inner circle of disciples even speak up to Jesus, and exclaim the difficulty of this teaching, but he stands firm. If Jesus did not want his followers to take his words literally, this was the perfect opportunity to clarify that he was only speaking figuratively. However, he sticks to the truth, and “as a result of this, many of his disciples returned to their former way of life and no longer accompanied him” (John 6:66).

The fourth and final lesson from the Eucharist is that Jesus clearly stated we receive his living Flesh and Blood, and from the beginning, this is a cause for division among the ranks. The Eucharist may be a difficult teaching and reality to understand, but its foundation from the lips of Christ is unquestionable. God’s proximity to his people has been doubted from the start, but his true presence endures at the Mass and in our tabernacles waiting for us to not run away, but run toward him in the Eucharist.

Will We Survive without the Holy Eucharist?

Why Am I Catholic? The Eucharist [Jackie Angel Video]

Do I Have to Go? 101 Questions about the Mass, the Eucharist, and Your Spiritual Life [Book]

Image by lininha_bs from Pixabay