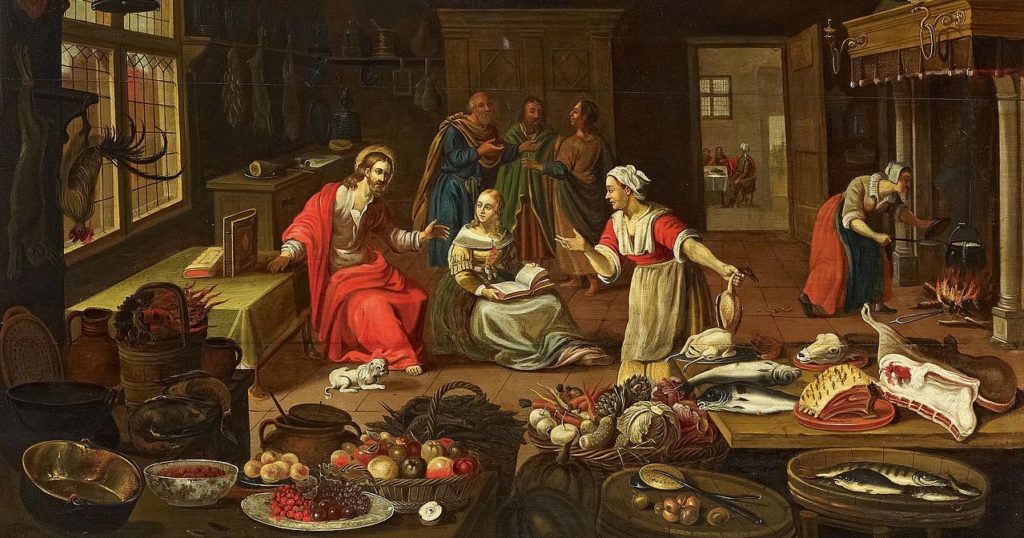 Many of us have a saint or two whom we can relate to and we want to emulate. One of my favorites is St. Martha (feast day: July 29). We see Martha several times in Scripture, and the first introduction to her is not very flattering. But in her later appearances, we see a woman who grows and becomes a pillar of faith.

Martha Doesn’t Get It

We first meet Martha, the sister of Lazarus, when she is entertaining Jesus in her home (Luke 10:38-42). She’s bustling about preparing the meal, and you can imagine it was a lot of work two thousand years ago. They were probably poor people who had no servants, but Martha had a sister, Mary, to help share the load. But wait! Where is Mary? Oh, there she is, sitting and listening to Jesus while Martha is working so hard. Somewhat miffed, Martha says to Jesus:

“Lord, do you not care that my sister has left me to serve alone? Tell her then to help me.”

Let’s stop here a minute and notice Martha’s incredible closeness and familiarity with Jesus. She calls him Lord, but then she asks if he even cares that she’s doing all the work herself. She’s actually annoyed at Jesus! Personally, I can relate. She’s doing all this work for him, and he doesn’t seem to care how hard it is! “Tell her to help me!” she demands. Now she’s telling Jesus what to do! She tells him how to fix the problem using the only paradigm she understands: work hard, take pride in your work, and make people happy, even if it runs her ragged and makes her a crank who thinks she knows better than God how things should be done. Yet again, I regret to say that I can relate.

Jesus’ response to Martha is often seen as a rebuke, but in my mind’s ear, I hear something different. I hear so much love in Jesus’ tone as he tries to both soothe and teach Martha at the same time:

“Martha, Martha, you are anxious and troubled about many things; one thing is needful. Mary has chosen the good portion, which shall not be taken away from her.”

Jesus is concerned for Martha and points out the real problem: her anxiety. She is not serving in a state of peace but in a state of turmoil, and perhaps more from pride of wanting to show what a good hostess she is than out of pure love. What Mary was doing right—the good portion—was listening to Jesus. She was giving Jesus her attention, something Martha forgot. Some Bibles translate this as “the better part” and certainly, listening to Jesus is better than working without listening to him. In Martha’s anxiety to set a good table for her guest, she forgot the guest.

Fast forward. Lazarus is dying and Martha and Mary send messengers to Jesus to come and save him. Does Jesus immediately come to the rescue? No. In fact, he purposely does not come right away.

Now Jesus loved Martha and her sister and Lazarus. So when he heard that [Lazarus] was ill, he stayed two days longer in the place where he was (John 11:5-6).

Why would Jesus not respond right away if he loved them? We might ask that question of the Lord ourselves when our prayers are not immediately answered. But God always answers our prayers in such a way that builds our faith, as Jesus explained to his disciples:

“’Our friend Lazarus has fallen asleep, but I go to awake him out of sleep.’” … (then) Jesus told them plainly, ‘Lazarus is dead; and for your sake I am glad that I was not there, so that you may believe. But let us go to him.’”

How does Martha respond to Jesus’ delay when he finally arrives, four days too late? She runs out to meet Jesus on the road before he even enters the town, “while Mary sat in the house” (John 11:20). This lady is a real doer! No sitting around for her! In her classic, straightforward familiarity, she again confronts the Lord, but with a twist:

“Lord, if you had been here, my brother would not have died.”

This is an incredible statement of faith in itself, but it gets better:

“And even now I know that whatever you ask from God, God will give you.”

Notice Martha’s growth in faith. She doesn’t tell Jesus what to do this time, but what she is saying is even more amazing. She tells him she knows he could still fix the problem if he wants. She’s essentially saying, “My brother is dead, but if you want, you can raise him from the dead.” Martha, the workaholic who wasn’t listening before, had tuned into what Jesus had intended all along!

Martha’s profound statement of faith is not yet through, because when Jesus asks her if she believes that he is the resurrection and the life, Martha, alone in the entire Gospel of John, makes the bold statement:

“Yes, Lord; I believe that you are the Christ, the Son of God, he who is coming into the world.”

Martha is now a pillar of strength and faith in the community, and Jesus’ questioning and delays made that clear to the rest of his followers, and possibly to her, as well.

Martha is not finished with her work. She now goes back and calls Mary, who is still sitting and crying in the house, and brings her to Jesus. Mary, who was praised for choosing the “good portion,” does not repeat Martha’s bold statements of faith. She who sat at Jesus’ feet to listen to him did not seem to learn. No wonder Jesus wept (John 11:35).

We know how the story goes. Lazarus is raised, and many come to believe in Jesus because of this. Soon the Pharisees are out to kill both Jesus and Lazarus, since Lazarus was living proof (literally) of Jesus’ power. But Martha, a woman of courage, has Jesus in her house again, and Scripture simply says, “Martha served.”

Those two words are like music to me, because they tell me that Martha finally gets it. She has grown in her faith and her love of Jesus. She has figured out how to fulfill her vocation of service while listening to him. She has become what Mother Teresa of Calcutta described her Sisters of Charity as being; she has become “a contemplative in action.” This is what I aspire to become: the Martha who gets it.

I believe it would be a great model of discipleship for all of us to become like Martha: to live out our vocation, not flagging in our work, not judging others, but keeping our eyes and ears on Jesus as we serve him in those he has put into our life. St. Martha, friend of Jesus, pray for us.

#4 Balancing Your Inner Mary and Martha

The Activated Disciple: Taking Your Faith to the Next Level [Book by Jeff Cavins]