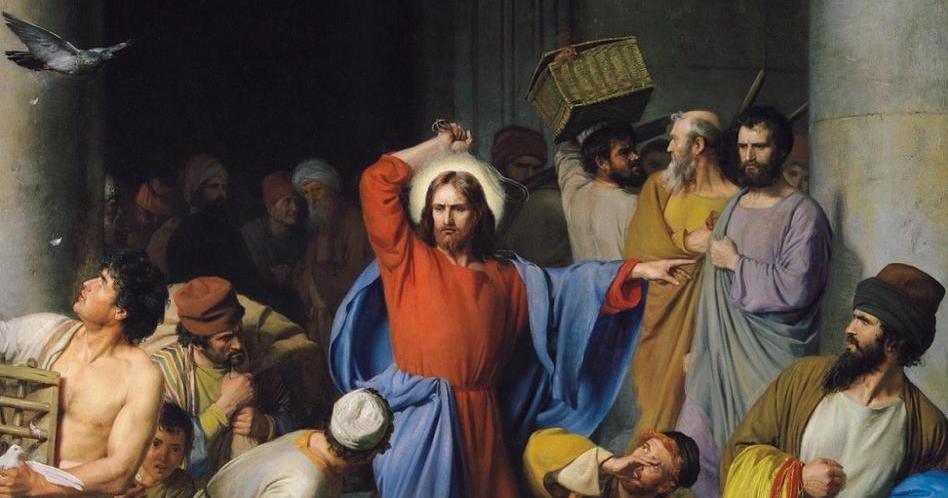 The two main events in the life of Christ that can inform Christians during these chaotic and tumultuous moments in our world are the teachings of Christ on retaliation (Matthew 5:38-48) and the Cleansing of the Temple (Matthew 21:12-17; Mark 11:15-19; Luke 19:45-48; John 2:13-25). These words and events provide pivotal directives and an undeniable invitation from Jesus himself.

The Sermon on the Mount is Christ’s most lengthy and thorough corpus of teachings. Following the famous Beatitudes, Jesus gives several admonitions that begin with the phrase:

He is referencing teachings based in the Old Covenant that he desires to build on, transform, and advance to their fulfillment.

In regards to violence and retaliation, Jesus states:

“You have heard that it was said, ‘An eye for an eye and a tooth for a tooth.’ But I say to you, offer no resistance to one who is evil. When someone strikes you on your right cheek, turn the other one to him as well.”

God does not condone violence for the sake of violence (here, we are speaking about something different than self-defense). The fulfillment of the Law on retaliation is found in understanding the phrase of “turning the other cheek.” To be struck on one’s right cheek would mean that the assailant used the back of his hand to slap someone. Jewish custom notes that this is one of the most degrading forms of physical attack. The intent is to embarrass and show the lack of worth in the one struck.

The Christian response is to offer the other cheek as well, to diffuse the situation with the acknowledgment that the embarrassment intended cannot degrade the person’s worth. An escalation in violence only leads to the continual diminishment of human dignity. The answer to a violent and hateful strike is never hate; the triumph of the Cross is not a weaponization of retaliation, but a victory of sacrificial transformative love that lays down and takes up suffering; it does not inflict hate upon hate.

Jesus “overturned the tables” (Matthew 21:12; Mark 11:15; John 2:15). The Cleansing of the Temple is the moment personifying Jesus’ revolt against the false practice and worship that has engulfed his father’s house. These money changers were doing their duty, though, according to Temple custom. Pagan coinage bore the image of the emperor and was deemed idolatrous, but they were performing actions necessary for the sacrifices of the Temple to proceed properly (especially due to the fact that this event occurs around the feast of Passover). Jews needed to be able to buy the animals necessary to offer their sacrifice. The money changers allowed them to do so by exchanging idolatrous funds for coins accepted by the Temple.

Christ’s actions to disrupt the practical pursuit of the Temple was a shout of the Son that echoes down through the ages: worship and life must always be seen through the lens of Jesus’ call to live life to the maximum. The flipping of tables is not the Messiah’s move to incite change through violence, but a statement of fact regarding his relationship to the Father and his invitation to humanity. He has authority over and above the Jewish aristocracy to prescribe proper worship; worship will be determined by his final act of unconditional love shown through his unrelenting, vicarious (“which means to stand in the place of”) sacrifice on the Cross. Christ overturns the tables because he is flipping the script on worship. Jesus is now the definitive location of God’s presence.

Most importantly, the teaching on retaliation and the Cleansing of the Temple is about an invitation. This invitation to humanity is one woven with daunting tasks and seemingly insurmountable odds. What resounds in the actions of Christ, in his life, teachings, suffering, and death, is the call to live radically for God and to never settle for moderate discipleship. Inviting us to the maximum means preaching his message of power as the only one that changes the world, even if it appears as weak and meaningless to others.

Jesus Christ calls his followers to live as he did; to turn our cheeks, to see that his words are truth, and to let him do the flipping of needed tables through the power bestowed upon him from the foundation of the world. The power that is not made up of violent attacks and worldly force, but of open hands and outstretched arms. His power appeared as weakness, but proved to be evil-shattering and earth changing.

The victory is his, so let us look to Jesus to accomplish the flipping, and let us accept the invitation. Because Christ’s power is not weakness. His way is the only path to true healing, restoration, and new life.

Why Jesus Got Fired from His Catechist Position

Walking Toward Eternity: Engaging the Struggles of Your Heart [Study Program]