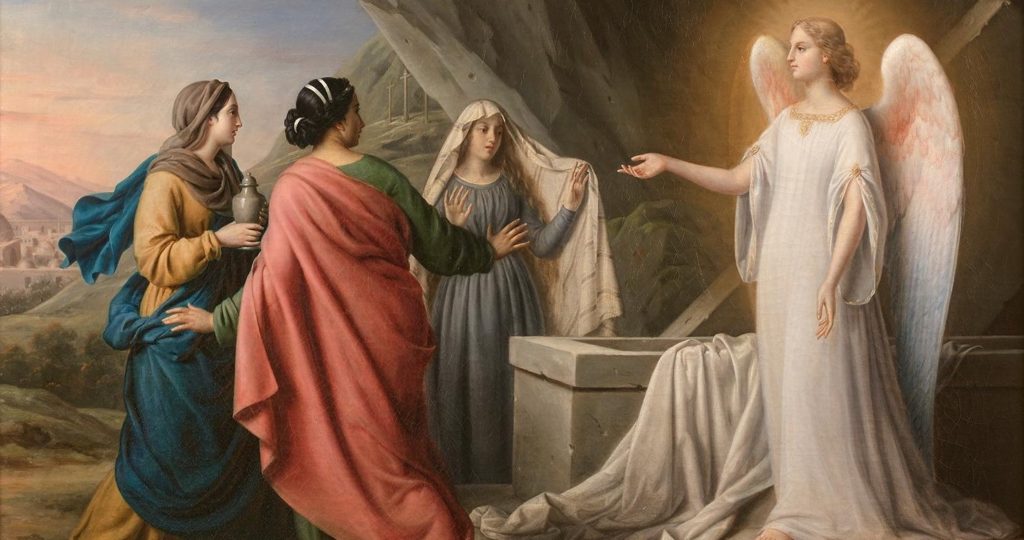 On May 24 the Church celebrates the life and devotion of St. Joanna. She is only mentioned twice in the Bible, both occurring in the Gospel of Luke, and her message of discipleship is abundantly clear: service to and proximity with Jesus Christ is the route to holiness.

Joanna’s First Appearance in the Gospels

Joanna’s first appearance comes directly after a nameless woman anoints Jesus’ feet with oil, and dries them with her own hair (Luke 7:37-50). Then we are told that Jesus went traveling to the next town in order to preach and we are given this detail:

“Accompanying him were the Twelve and some women who had been cured of evil spirits and infirmities, Mary, called Magdalene, from whom seven demons had gone out, Joanna, the wife of Herod’s steward Chuza, Susanna, and many others who provided for them out of their resources.”

Here, we are given important information regarding Joanna. She is named among the group of women who Jesus had “cured of evil spirits and infirmities.” We are not given the details of what happened, but we know that Jesus encountered Joanna, healed her of some ailment in dramatic fashion, and she left everything behind to serve Christ (“provided for him”).

We are not certain what she was healed of, I think, on purpose. A major initiative of the Holy Spirit is to show us that any of these figures in the life of Christ could be you or me. Is there an evil you are struggling with? What is something you need to be healed of physically, mentally, or spiritually? Joanna teaches us that Christ’s mission is to conquer sin and evil and she invites us to follow him on the way. While we follow Jesus, the correct position of the disciple is to “provide” for him through our service to the good news (works), and our worship of the one true God (faith).

The second reference of Joanna comes on Easter morning. We are told that several women made their way to the tomb at dawn, and saw the rock rolled away from the tomb of Jesus with no body to be found inside (Luke 24:1-3). Angels appeared to them, and reminded them of the words Jesus spoke to his disciples regarding his suffering, death, and resurrection (Luke 24:5-8). The women realized the reality of the resurrection and wasted no time, they acted:

“Then they returned from the tomb and announced all these things to the eleven and to all the others. The women were Mary Magdalene, Joanna, and Mary the mother of James; the others who accompanied them also told this to the apostles, but their story seemed like nonsense and they did not believe them. But Peter got up and ran to the tomb, bent down, and saw the burial cloths alone; then he went home amazed at what had happened.”

An Eyewitness of the Resurrection

Joanna is among the handful of people to first know and believe that the resurrection occurred. Joanna’s witness gives Christians the first piece of evidence to prove that the resurrection is a fact of history, not a figure of the disciples’ imagination or a hoax. Her heart moved her to crave proximity with Jesus, so she made her way, most likely, to lend a hand in anointing his corpse. And yet, she found that there was no body, Jesus had risen. An empty grave is the starting point to proving the truth of the resurrection, and it was the spark that directly led to the preaching of Jesus’ return.

Today, let us be moved, like St. Joanna, to serve Christ with our words and crave an encounter with Jesus through our worship. Like some of the early followers and witnesses, there will be some people who do not believe this is possible and they may call our words nonsense. However, St. Joanna shows us that once we have encountered the risen Christ, there is nothing that should halt the proclamation of our eyewitness account of his power, life, and love.

Why You and I Need the Resurrection [Dr. Edward Sri Podcast]

What Can the Shroud of Turin Tell Us about Jesus’ Final Hours?

You Are Enough: What Women of the Bible Teach You About Your Mission and Worth [Book]

Featured painting, The three women on the tomb of Christ (1843), by Irma Martin sourced from Wikimedia Commons

A Hopeful Easter Message for Hard Times
The Lord Heard Thomas When He Didn't Believe
The Roundup: New Videos, Podcasts, and Articles
The Roundup of Ascension's Weekly Content
Has Ascension's free media strengthened your faith?
You can now offer ongoing support for this content with a recurring gift.
Support Ascension