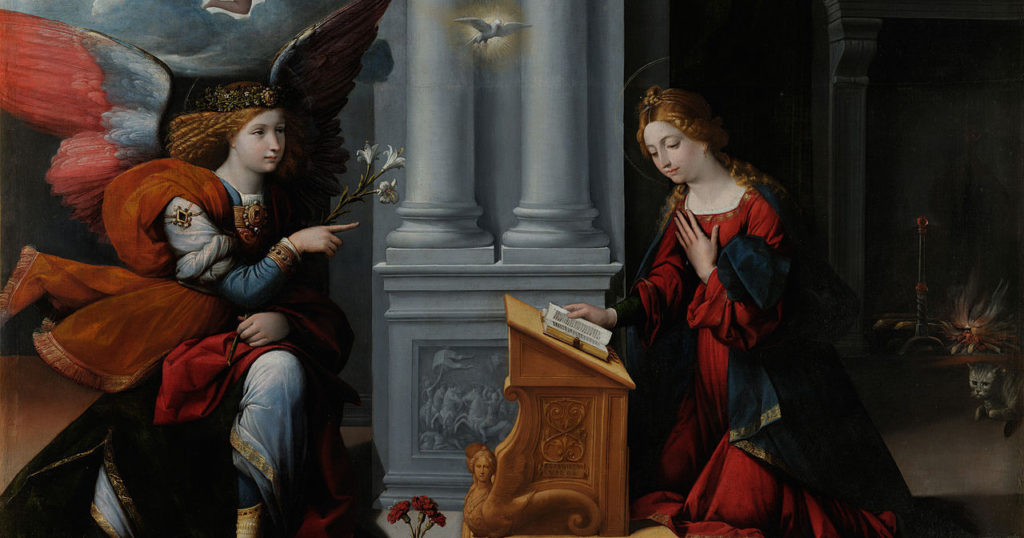 Every Marian feast on the Church’s liturgical calendar has a direct link to Christ Jesus. For instance, the Feast of the Blessed Virgin Mary’s Assumption recognizes that she was assumed body and soul into heaven directly through her divine son’s power. But the Feast of the Annunciation heightens the Marian connections to the saving action of Christ, as those connections are undeniably clear and distinct in this feast.

Now when this blessed feast is celebrated, many people focus on the fiat, that yes, which our Blessed Mother gave to God. But Pope Francis in a homily a couple of years back reminds us of how truly earth-shaking this feast is:

“The passage from Luke’s Gospel [Luke 1:26-38] that we have heard tells us the decisive moment in history, the most revolutionary. It is a turbulent situation, everything changes, history turns upside down. It is difficult to preach about this passage. And when at Christmas or on the day of the Annunciation we profess the faith to say this mystery we kneel down. It is the moment that everything changes, everything, from the root.”

Indeed, history changed with this one moment. Not only did our Blessed Mother, the sole boast of our fallen human race, say yes to God at that instant, but our Lord Jesus was conceived in her womb. As we know scientifically that life begins at conception, we also celebrate on this day the Incarnation. It was here that God became man, and if you think about it, one could say in all fairness that our God was a tiny little zygote! He was tiny and vulnerable, he who created the entire universe, but condescended to enter into the same life cycle you and I have experienced out of his deep love for us and willingness to save us through his life, passion and death on the Cross.

The vulnerability that started in the Blessed Virgin’s womb was fully realized on the Cross when he gave his all for our sake. In light of this, it’s no wonder then that the feasts of Good Friday and the Annunciation are intricately linked, and give us a clue as to why we celebrate the Annunciation on March 25. The reason is much deeper than the mere fact that March 25 is nine months before Christmas Day.

Just a few years ago, the entire Church experienced this close link between the two feasts of the Annunciation and Good Friday. In 2016, Good Friday and the Annunciation both fell on the same day. This rare convergence of the two dates may never occur in our lifetimes again, the next aligning of the calendar being during Holy Week of 2157! Nowhere else was this convergence more pronounced than within the Byzantine Rite. I was fortunate to participate in the Divine Liturgy at a local Ruthenian Catholic parish and is still (and will be) the only time I’ve been able to participate in the Holy Sacrifice on a Good Friday. The experience was truly otherworldly, and taking in the heavenly Liturgy that was all around us was an unforgettable moment.

The usual liturgy said for Good Friday is combined with the Divine Liturgy for the Annunciation when this rare occurrence happens. So the priest, deacons, and altar servers all came out at the beginning wearing blue vestments for the Marian feast (yes, blue is a liturgical color in the Byzantine Rite), but started off by saying the Vespers for Good Friday, with some portions reflecting the feast of the Annunciation also. For instance, one of the prayers chanted recalls the moment of the Incarnation:

“The Theotokos heard a voice she did not know. The archangel spoke to her the words of good news. She received the greeting with faith and conceived you, the God from before all ages. Therefore, we also rejoice and cry out to you, O unapproachable God who were incarnate of her: Grant peace to the world and great mercy to our souls.”

Contrast that with what was sung just prior to that selection, with this below:

“The whole creation was transformed with fear, when it saw you hanging on the Cross, O Christ. The sun grew dark and the earth’s foundations were shaken. All things suffered along with you, who made all things. O Lord, who willingly endured this for us, glory to you!”

The parallel between mourning and rejoicing are so closely intertwined in this specific Liturgy. It was awesome to see these two events both being described in such a beautiful way. These parallels between the two feasts then show us how we came to the date of the Annunciation on March 25. As mentioned above, some simply think that we celebrate the Annunciation on this day since we count nine months back from Christmas. However, the process of coming to these dates has been flip-flopped. Let’s consider a few things as we look to the historical reasoning of the connection between Good Friday, the Annunciation, and Christmas.

Creation of the World and the Church

First, if one takes a look at the Roman Martyrology, one will find that the entry for March 25 includes not only an entry for the Annunciation, but also for St. Dismas, the Good Thief who died on the cross next to Jesus Christ:

“March 25 … At Jerusalem, the commemoration of the good Thief, who confessed Christ on the cross, and deserved to hear from Him these words: ‘This day thou shalt be with Me in Paradise.’”

Now this does have some significance as we look to the connection between the Annunciation and Good Friday. Since feast days celebrate (typically) the earthly death and subsequent birth into heaven of the saint being celebrated, we can plainly reason that St. Dismas and our Lord Jesus entered Paradise together on the same date. Traditionally the Church, especially in Syria, has long held that the Crucifixion did actually take place on March 25. Many of the early Church Fathers of the East are also known to have agreed that the date of Christ’s death on Good Friday happened on March 25; this is how many early Christians were able to date the feast of Easter, which was two days later. St. Hippolytus of Rome, writing between the years of 202-211 A.D., mentions the following in his “Commentary on Daniel”:

“For the first advent of our Lord in the flesh, when he was born in Bethlehem, was December 25th, Wednesday, while Augustus was in his forty-second year, but from Adam, five thousand and five hundred years. He suffered in the thirty-third year, March 25th, Friday, the eighteenth year of Tiberius Caesar, while Rufus and Roubellion were Consuls.”

Furthermore, in the Babylonian Talmud, which was an extra-biblical compendium used by Rabbinical Jews which contained writings of the Jewish Oral Tradition, there was a tradition recorded by some leaders, proposing that among Jewish holy men, a great prophet died on the same day of his birth or conception. This means they lived their lives in whole or “integral” years (from the Latin integer “whole”). This is where we have the “Integral Age Theory” come into play for the dating of Christmas. Moses was a specific example given for this theory.

It stands to reason that some of those Jewish rabbis who studied and read the Babylonian Talmud converted to Christianity in the first two centuries A.D. It’s also possible that these converts played a role in the thinking of early Christians in fixing certain feast days, such as Christmas and Easter. Knowing all that, it is totally plausible that the integral age view is where our current dating for Christmas comes from, and also may explain why many believe that our Lord Jesus was crucified on the same day he was conceived.

So why do we celebrate the feast of the Annunciation on March 25? Not because of a backdating from Christmas, but due to the dating of Good Friday. And once there was a date set for Christ’s conception, the early Church was then able to work forward to determine the date of Christmas, nine months later!

Now whether or not Christ was actually born on December 25 or crucified on March 25 is another matter entirely, but if this is the information that the early Christians were working on, then we can understand more clearly why the Church has celebrated for so long the feasts of St. Dismas, the Annunciation, and our Lord’s Nativity on these specific days.

The liturgical calendar is a beautiful thing, and it’s amazing to see how the economy of salvation is so interconnected. During this year’s feast of the Annunciation, let’s call to mind more the connection between this day and Good Friday. Jesus’ salvific mission began when he was conceived in the Virgin’s womb, and then culminated at that moment on the Cross when he uttered, “It is consummated” (John 19:30).

The Cosmic Vision of Christianity

In closing, a reflection on how all these mysteries are wrapped up into one, given by Pope Benedict XVI in his classic The Spirit of the Liturgy, will help us to understand the importance of the connection of the Cross to the Blessed Mother’s fiat, and how it all points back to the creation of the world and our own new creation and rebirth through baptism in this age of the Church:

“Astonishingly, the starting point for dating the birth of Christ was March 25. The decisive factor was the connection of creation and cross, of creation and Christ’s conception. These dates brought the cosmos into the picture …

“Jewish tradition gave the date of March 25 to Abraham’s sacrifice. Now, as we shall see presently, this day was also regarded as the day of creation, the day when God’s word decreed: ‘Let there be light.’ It was also considered, very early on, as the day of Christ’s death and eventually as the day of his conception … These cosmic images enabled Christians to see, in an unprecedented way, the world-embracing meaning of Christ and so to understand the grandeur of the hope inscribed in Christian faith. This is most illuminating. It seems clear to me that we have to recapture this cosmic vision if we want once again to understand and live Christianity in its full breadth.”

The Annunciation: ‘Greatest Event in Our History’