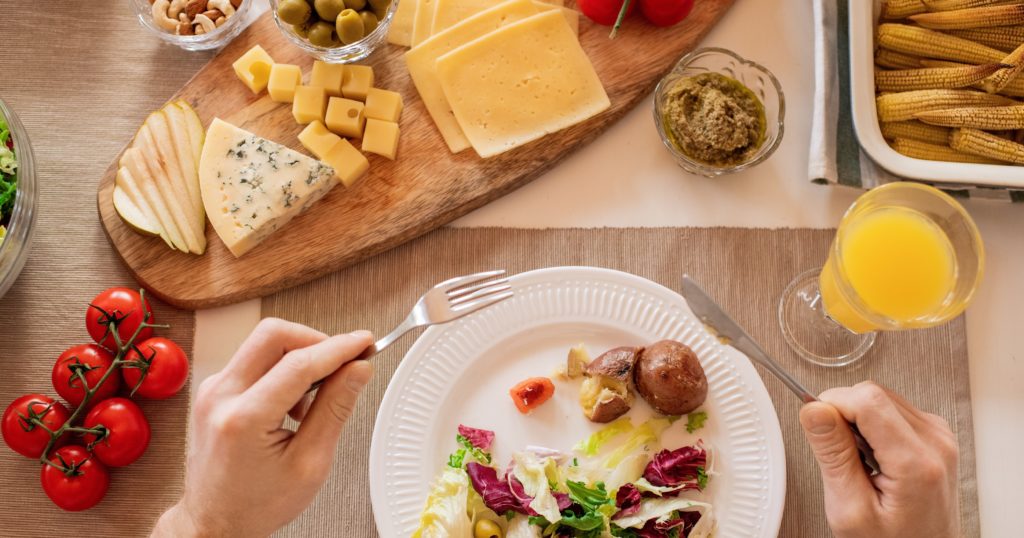 Ahh Lent.  A time of penance, abstinence, fasting, and having to dig for the recipes I don’t normally cook. Raising kids means making meat. During the Fridays of Lent, it means branching out from cod. Here are some recipes I’ve collected over the years.

Put the pasta, vegetable stock, cream, salt, and pepper into a pressure cooker. Set pressure cooker to high pressure and set timer for 7 minutes. Once the timer goes off, let the steam out of the pressure cooker using a quick release method. Add butter, milk, and the cheeses to the pot and stir.

Toss the sweet potatoes with the olive oil, chili powder, and salt. Arrange on a large rimmed baking sheet, roast 30 minutes at 450 degrees.

In a saucepan combine the black beans with the salsa verde. Cook on medium until warm; stirring.

Serve sweet potatoes and beans with sliced avocado, crumbled cotija or feta cheese, and cilantro on the tortillas.

In a 6 quart slow cooker stir together broth, tomatoes with juices, fennel, and onion. Cover and cook on low 6 hours or high 3 hours.

If cooking on low, turn to high. Stir in kale, tortellini, and oregano. Cover. Cook on high 30 minutes more or until tortellini are tender. Stir in cream. Serve with parmesan cheese.

Cut neck off butternut squash (reserve base for another use). Peel and cut into ½ inch pieces. Heat 1 tablespoon olive oil in skillet on medium. Add squash and cook, covered, stirring occasionally for 8 minutes.

Using a fork, mash the white beans and add to the soup along with the chickpeas.

Cook ½ cup couscous according to package directions. Fluff with a fork and fold in pistachios, cilantro, dried apricots, and scallion. Serve soup topped with couscous mixture.

Preheat oven to 375 degrees. Place salmon, skin side down, in a shallow baking pan.

In a small bowl, combine shallot, lemon zest, and salt; stir in olive oil. Spoon about 2 teaspoons of the mixture over top of each fillet. Set remaining mixture aside.

Roast salmon 10-15 minutes or until fish flakes when tested with a fork. Meanwhile, steam green beans 5 minutes or until crisp-tender. Transfer to a platter. Toss with reserved shallot mixture and half the basil; season to taste with salt. Remove skin from salmon and place fillets on green beans. Squeeze lemon over fish, top with remaining basil.

Cook down the onions. Heat a large pot on medium and cook onions in your butter/oil until translucent. Add in the garlic cloves and cubed butternut squash. Cook for another 4-5 minutes until your entire kitchen begins to smell.

Add in the coconut milk, broth, and spices. Cook on medium until the soup comes to a low boil. Then, lower the heat so the soup is simmering for another 20-25 minutes.

Remove the soup from the heat. Discard the rosemary sprigs and cinnamon sticks. Blend the soup in a high-speed blender or with an immersion blender until smooth and creamy. Adjust the salt and pepper according to your taste preference.

For the zesty red tomato sauce:

Peel sweet potatoes and spiralize them into noodles. If you don’t have a spiralizer, you can julienne them and make more of a stir fry. Place sweet potato spaghetti noodles in small microwave safe bowl with 1 tablespoon of water. Microwave for 30-40 seconds to soften. Set aside.

Drain the tomatoes. Place all sauce ingredients into a food processor or blender. Blend until smooth.

Place garlic, onion, and oil/butter in a large skillet or pot. Fry for 1-2 minutes until fragrant and onion is softened. Mix in tomato sauce and let it cook for another minute or so on medium. Add sweet potato noodles, kale or spinach, and the rest of the spices. Toss and cook for 8-10 minutes on medium or until kale/spinach is softened and the noodles are done to your liking. Keep tossing the noodles with the other ingredients every few minutes.

Add olives and capers and toss. Garnish with fresh basil or oregano. Salt and pepper to taste.

Eggplant and Tomato Masala with Chickpeas (from Real Simple, October 2019)

Rinse rice until water runs clear and drain. Transfer to a saucepan and add 1 ½ cups water. Bring to a boil over high; reduce heat to medium and simmer, covered, until liquid is absorbed and rice is tender, about 15 minutes. Remove from heat; let stand, covered, for three minutes. Fluff with a fork.

While rice cooks, heat 1 tablespoon oil in a large, high-sided skillet over medium-high. Add cumin, mustard, and coriander; cook, stirring constantly until fragrant, about 1 minute. Add onion; cook, stirring occasionally, until tender and golden, about 8 minutes.  Push onion mixture to sides of skillet. Add eggplants and remaining 2 tablespoon oil to center of skillet, cook undisturbed, until eggplants are lightly browned on 1 side, about 2 minutes.

Add chickpeas with their liquid, tomatoes, cilantro stems, salt and garam masala to skillet and stir to combine. Reduce heat to medium-low; simmer, stirring occasionally, until eggplants are tender, about 5 minutes.

Serve eggplant and tomato masala over rice, garnished with yogurt and cilantro leaves.

Quinoa with cucumbers, dill and feta (from Everyday Food)

In a small saucepan, bring quinoa, 1 ½ cups of water and 1 teaspoon sea salt to a boil over high. Reduce to a medium simmer and cook until water evaporates, about 15 minutes. Transfer to a medium bowl and let cool 5 minutes.

Add butter and whisk until melted. Add cooked pasta and toss until coated. Add grated cheese and toss to coat. Season to taste with salt and pepper. Sprinkle with parsley and serve with additional cheese.

Preheat oven to 350 degrees. Heat oil in a medium skillet and saute onion and garlic until soft. Mash beans into the onion mixture. Gradually stir in water; heat until warm, 2-3 minutes. Remove from heat and stir in the soy sauce, chili powder, mustard, cumin, and cayenne pepper.

Divide bean mixture and mashed sweet potatoes evenly between the tortillas; top with cheese. Fold tortillas burrito style around the fillings and place on a baking sheet. Bake until warmed through, about 12 minutes.

Remove cover and cook over high heat until liquid is reduced and sauce is thickened to desired consistency. Serve over pasta, sprinkle with cheese and cilantro.

Preheat the oven to 375 degrees.

Wipe out the skillet with paper towels and return it to medium-high heat. Add the remaining 1 tablespoon olive oil and the refried beans and stir. Pour in the broth and mix until incorporated. Add the pico de gallo and stir to combine. Set aside.

Dive the tortilla chips between two 9×13 inch baking dishes. Spoon the beans over the chips in each baking dish. Top each with half the vegetables and sprinkle cheese evenly over each. Scatter the jalapeno slices on top. Bake until the cheese is melted, about 7 minutes. Switch the oven to broil and broil until the cheese is golden and bubbling, 1 to 2 minutes.

Serve with additional pico de gallo and the avocado.

In a medium saucepan, cook the farro according to the directions on the package. Drain well and let cool. (The farro can be made ahead of time and refrigerated.)

In a large nonstick skillet over medium-high heat, heat 1 teaspoon of the peanut oil until shimmering. Add the egg mixture and scramble until it sets, 3 to 4 minutes. Transfer the egg to a plate, cut into bite-size pieces, and set aside.

Wipe the skillet clean, add the remaining 1 tablespoon plus 1 teaspoon peanut oil, and heat over medium-high heat until shimmering. Add the carrots and cook, stirring, for 2 minutes. Add the broccoli and cook until the vegetables are fork-tender, 3 to 4  minutes. Stir in garlic, ginger, scallion whites, and peas and cook for 2 minutes. Season with ½ teaspoon salt.

Using a wooden spoon, push the vegetables to the sides of the skillet, making a well in the center. Add the cooked farro to the well and gradually mix the vegetables into it.

Ricotta and Spinach Calzones (from The Complete Vegetarian Cookbook)

Place dough on lightly floured counter, divide in half, and cover with greased plastic wrap. Working with 1 piece of dough at a time (keep other piece covered), use rolling pin to flatten dough into 9 inch round. Transfer each piece of dough to parchment square and reshape as needed.

Spread half of spinach filling evenly over half of each dough round, leaving 1-inch border at edge. Brush edge with egg wash. Fold other half of dough over filling, leaving ½ inch border of bottom half uncovered. Press edges of dough together and crimp to seal.

Do you know of any other great recipes for Fridays during Lent. Feel free to share them in the comments! Thanks and have a blessed Lent.

What Do You Want This Lent?

3 Essential Practices for the Lenten Season

The Way of the Cross: Praying the Psalms with Jesus