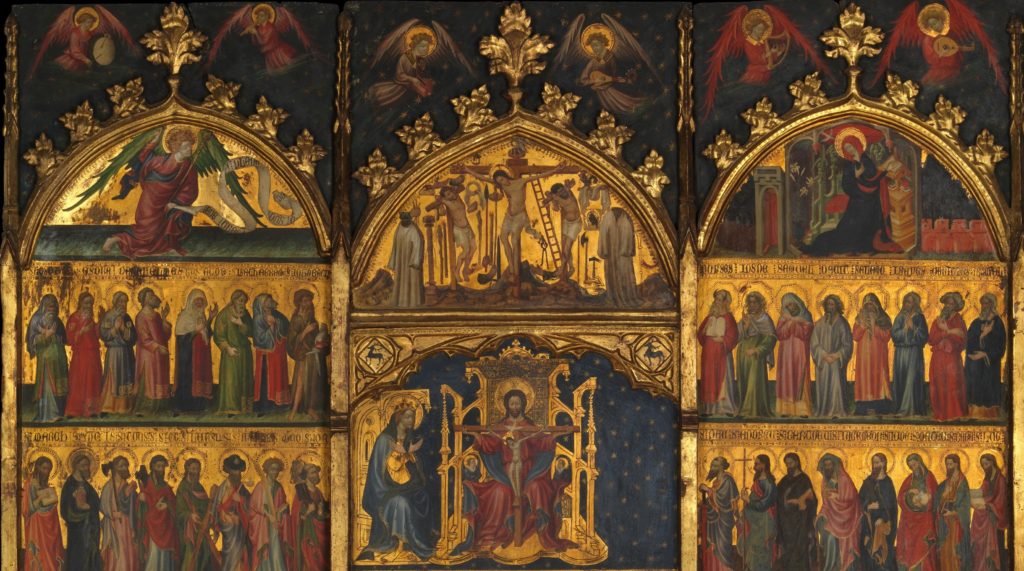 In “The Need for a Creed,” we discussed how Christianity uniquely prioritizes creeds. Christianity is a religion of the Word, the Word that created the world and the Word that became flesh and dwelt among us. Fidelity to God’s Word consists in part of echoing this Word in our confession of faith. Indeed, Christian faith is first a gift or grace to be received, not a tool to be wielded. Submission to fixed formula regards the givenness of faith. Creeds then hold us accountable to the Word of God; they hold our minds still before the Word so they can be conformed to the truth.

Precedents to the Apostles’ and Nicene Creeds

When one studies early Christian creeds, one is struck immediately by two things: how many there are and how similar they are. Creeds were used by the early Christians in two main ways. First, in a predominantly illiterate society, memorization and recitation of creeds allowed teachings to be fixed in an oral rather than textual way. In preparation for baptism, catechumens would hear a series of lectures on a creed-like summary of the Christian faith and would then be required to recite the creed during the ceremony. A famous example of these lectures is the so-called Catechetical Lectures of St. Cyril of Jerusalem (315-386). From his lectures, scholars have attempted to reconstruct the creed that his catechumens would have been expected to recite.

In the second place, creeds were used to identify and interpret Scripture in the context of false teachers and false scriptures. We stand on the other side of a defined canon of Scripture, which occurred at the end of the fourth century, and two-thousand years of doctrinal development. We can go buy the Bible in our local bookstore. We can consult the Catechism for an understanding of what Scripture means. But in the earliest Church they were still discerning which writings were authentic and which ones were heretical counterfeits. They were having arguments about the meaning of Scripture that would eventually lead to the clarity we now take for granted. During these uncertain times, bishops and priests would appeal to what they called the “Rule of Faith” to distinguish truth from error. This was a creed-like summary of the plot of Scripture that these writers said was given by apostles themselves. For a well-known example of the “Rule of Faith,” look at Book I, Chapter 10 of Against Heresies by St. Irenaeus (c. 130-200), the Bishop of Lyons.

When we look at the two most well-known and oft-used creeds of western Christianity—the Apostles’ Creed and the Nicene Creed—we see these two functions of the earlier creeds or rules.

Although in 404 AD Tyrranius Rufinus perpetuated the legend that the apostles themselves wrote the Apostles’ Creed, most scholars agree it is an eighth century expansion of the second century baptismal creed of Rome called the “Roman Symbol.” Its primary usage was as a baptismal creed, a function it retains to this day. At the same time St. Ambrose (339-397) and St. Augustine (354-430) urged their flocks to recite daily the “Symbol of Faith.” This devotional recitation is part of the reason it heads the Rosary.

He Descended into Hell

The Nicene Creed is more expansive than the Apostles’ Creed, but the latter does contain two assertions that do not have equivalents in the Nicene Creed. The first is the statement that after Jesus died, he “descended into hell.” This phrase relates to 1 Peter 3:18-19 which states:

“For Christ also died for sins once for all, the righteous for the unrighteous, that he might bring us to God, being put to death in the flesh but made alive in the spirit; in which he went and preached to the spirits in prison.”

There are two biblical terms that are translated into English as “hell.” The first is hades which is the place where the just who died before Christ went as they awaited redemption. The second is Gehenna which is the final punishment for the damned. When the Apostles’ Creed states that Jesus “descended into hell” it is referring to this first usage of “hell.” Thus, the Catechism clarifies the meaning of this statement as follows:

“Jesus did not descend into hell to deliver the damned, nor to destroy the hell of damnation, but to free the just who had gone before him.”

Catechism of the Catholic Church, 633

The Communion of the Saints

The second confession is belief “in the communion of the saints.” This notion concerns the way in which the Church in its three states—Militant, Penitent, and Triumphant—shares a profound spiritual bond through her head, Jesus Christ.

The Scriptures overwhelmingly conceive of a saving relationship with God as a matter of being in a covenant with him. We owe a great debt to Dr. Scott Hahn for showing that a “covenant” is an establishment of a family relationship. Throughout the Scriptures, God consistently treats us as his children and works to save us by creating new families. In Genesis 1:26, God creates humankind in his “image and likeness,” language that is used just a few chapters later to describe Adam’s son Seth (Genesis 5:3). When God purposes to bless all the families of the earth, he promises Abraham and Sarah that they will have a miraculous child (Genesis 15:4). When God rescues the Israelites from Egypt, he calls them to be his firstborn son (Exodus 4:22). This theme of being members of God’s household and family climaxes in St. Paul’s description of us as “adopted sons of God” who are heirs of our Father’s house (see Galatians 3:23-4:7). This means that we must “love one another” (John 13:24) and recognize that “we, though many, are one body in Christ, and individually members of one another” (Romans 12:5).

God does not call us to a merely individual or personal relationship to him. Rather, God desires a familial relationship with his children. He intends for us to be connected not just to him but to each other. We should love and cherish our fellow Christians like we love our own flesh and blood. This is our belief “in the communion of the saints.” Through Jesus Christ, the Church is a spiritual family and, like a family, can share prayers and benefits.

The Nicene Creed was first articulated in 325 at the first ecumenical Council of Nicaea in response to the heresy of Arianism. The major question was the interpretation of Scripture. This is why we recite the Nicene Creed after the readings and homily at Mass.

The heresy of Arianism was articulated by Arius, a popular priest in Alexandria. He looked at Scriptures like John 3:16, which refers to the Son of God as “begotten,” and Colossians 1:15 which refers to Christ as the “firstborn of creation,” and concluded that Jesus was not fully divine. His argument went something like this:

1. The fundamental quality that distinguishes God from creation is eternality

2. The Bible describes the Son as “begotten” and “the firstborn”

3. To be “begotten” or “born” means to come into existence at a point in time

Arius did think that Jesus had as much divinity as possible for a creature, and so was the closest creature to God. But strictly speaking he was fundamentally like us creatures, not God. On Arius’ view, God first created the Son and then the Son created the rest of creation.

In the background to this controversy was the Church’s earlier condemnation of the heresy of Gnosticism. Among other things, Gnostics believed that the cosmos consisted of a series of degradations of divinity. Divinity is pure spirit and knowledge. At the opposite end of the spectrum is the material world, our world. For Gnostics, material creation, being an extreme degradation of divinity, is evil. One of the principal problems with Gnosticism, then, is that it denied that God created the world. Accordingly, they also denied the humanity of Jesus Christ, even as they did see him as the one who could lead us back to the spiritual world.

As the Church countered Gnosticism, she realized that if the material world was not directly willed by God according to his perfect wisdom, then there would be reason to doubt its goodness. Arianism, in seeing Jesus as a kind of degradation of God and the material world as created by a creature, posited distance between God’s perfect wisdom and the creation of the world and therefore reopened the door to Gnosticism.

Jesus is Eternally Begotten of and Consubstantial with the Father

To refute Arius’ view that if Jesus is “begotten” he cannot be equally divine with the Father, the Nicene Creed added several qualifying phrases. The first is “born before all ages” or, sometimes translated, “eternally begotten.” By this, the Nicene Fathers intended to indicate that the Son’s begottenness is not an event in time, but an eternal relationship of the Son to the Father. Here, the Son eternally has the divine nature “from the Father” and is thus “God from God, Light from Light, true God from true God.” Furthermore, the Creed adds that Jesus is “begotten, not made.” During the controversy, a distinction was made between “making” and “begetting.” If you “make” something like a computer, it does not share your nature. But if you “beget,” you give your very nature to an offspring. If the Son is “begotten” of the divine Father, then the Son must be of the same nature as the Father, in the same way that if you “beget” children they are just as human as you are. Hence, Jesus is “begotten, not made,” meaning he has the same nature as the Father.

As if it wasn’t clear enough, the Creed then adds that Jesus Christ is “consubstantial with the Father.” This term means that Jesus’ substance or being is identical to that of the Father. In other words, Jesus Christ possesses all the qualities of divinity like omnipotence, omniscience, eternality, aseity, immutability, omnipresence, and so on. But, as we just noted when we discussed his eternal begottenness, Jesus has these qualities “from the Father.”

Finally, the Nicene Creed adds “through him all things were made.” This is another way of identifying Jesus with the Father who earlier the Creed asserted is the “maker of heaven and earth, of all things visible and invisible.”

The creeds were never intended to be an exhaustive catalogue of Christian doctrine. Rather, they specify the core of our faith and guide us in the interpretation of Scripture. They are meant to be expounded, the basis for the elaboration of the whole of our faith. In the same way, contradictions of the creeds occur not only through direct denial of its statements, but also by discerning if certain positions undermine the core confessions of the creeds.

The Trinity: Peering into Jesus’ Relationship in God

The Need for a Creed

Dr. James R. A. Merrick is lecturer at Franciscan University of Steubenville, Senior Fellow at the St. Paul Center for Biblical Theology, and a theology and Latin teacher at St. Joseph’s Catholic Academy in Boalsburg, Pennsylvania. Dr. Merrick is also on the faculty for the Diocese of Altoona-Johnstown’s Lay Ecclesial and Diaconal Formation program. Previously he was scholar-in-residence at the St. Paul Center for Biblical Theology. Before entering the Church with his wife and children, he was an Anglican priest and college theology professor in the United States and in the United Kingdom. Follow Dr. Merrick on Twitter: @JamesRAMerrick.

Featured painting, The Trinity Adored by All Saints (c. 1400), sourced from Wikimedia Commons