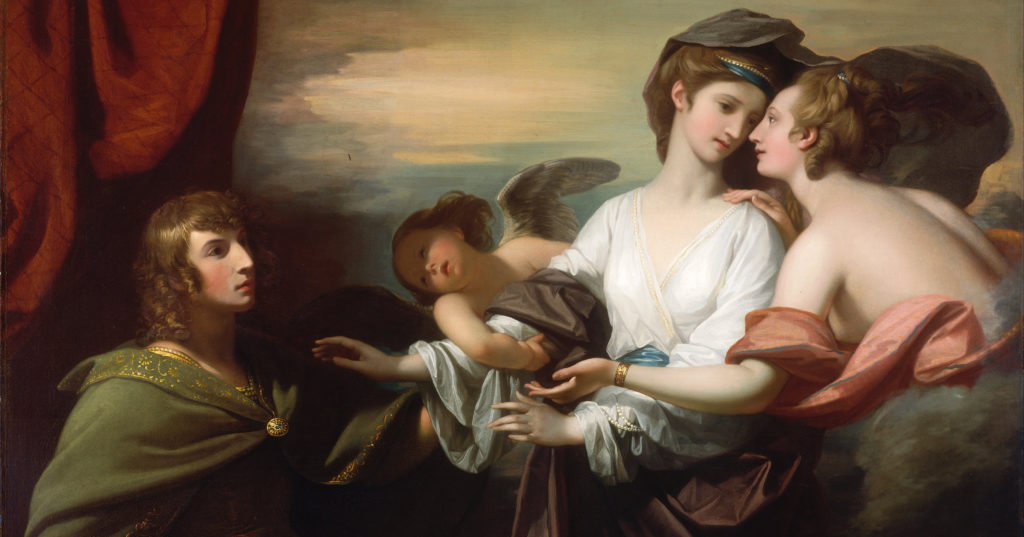 Lust within the context of the deadly sin refers to an intense and inordinate desire for sexual gratification.

Our current culture’s belief in the harmlessness of casual sex, the constant sexual references and suggestions in media, the availability of internet pornography, and the frequent promotion of sexual gratification as a healthy and fulfilling end in itself, has made lust a prevalent deadly sin in contemporary Western Culture.

Moreover, lust is the root cause of infidelity, promiscuity, licentiousness, and sexual addictions. As such, lust frequently is the cause of broken relationships, broken marriages, unsuccessful marriages, and unsuccessful family life, along with their deep and oftentimes devastating negative emotional consequences.

However, lust isn’t just a problem in the twenty-first century. Both ancient and modern literature exemplify the disastrous consequences of lust that are still possible today.

The Iliad and Lust that Starts a War

Some of the effects of lust are blindness of mind, thoughtlessness, inconstancy, and rashness. The plot of Homer’s Iliad moves on these very effects. For instance, the context of the story is that of Paris, Prince of Troy, who names Aphrodite (the Goddess of Love) the fairest of three Goddesses for the award of Helen—a married woman.

Helen’s husband, Meneleus, wages war upon Troy in order to regain his bride and avenge Paris.

Lust continues within the plot, plaguing both sides in the war. For most of the epic poem, instead of fighting alongside his brothers, Paris stays in his chambers with Helen. Likewise, Achilles, enraged by the fact that his mistress, Briseis, has been taken from him, chooses to sulk inside his tent instead of fight.

In the story of the Iliad, lust even plagues the gods. Hera (wife of Zeus), still angry with Paris for choosing Aphrodite as the most beautiful, sides with the Greeks in the war. Thus, in an effort to aid the Greeks, Hera, through seduction, distracts her husband from his neutral position of watching over both sides.

By the end of the poem, Paris’ lust not only starts a war, but causes him a moral wound and burns his city to the ground.

While on a day to day basis, lust might not start wars on cities, it can cause feuds in families, divorce, and other catastrophic consequences within relationships with those we care for.

Jane Austen and Lust that Deters

In her writing, Jane Austen often illustrates the negative effects of lust. Two of Austen’s villains chase lust instead of sticking with their intended goals, and both end up quite dissatisfied.

While perusing Mansfield Park, the reader might be somewhat fooled by Henry Crawford’s seemingly gentlemanly pursuit of heroine, Fanny Price. However, Henry becomes distracted and runs off with a married woman, destroying for him all hope (if there ever was any) of Fanny’s affection.

Moreover, George Wickham, the villain of Pride and Prejudice, seeks to marry for mercenary reasons. In the end, his desires get the better of him, and off he runs with Lydia Bennett, annihilating his hopes for a financially beneficial union.

Austen shows that lust is hard to resist, even when one truly tries. In today’s culture, sexual stimulation (from sexual activity to pornography) is frequently addictive. This allows sexuality to become an end in itself, leading one away from higher purposes and intentions.

Tolstoy and Lust that Ruins All

Lastly, and perhaps the best and most realistic example of the devious effects of lust in literature, is that of Tolstoy’s Anna Karenina.

Anna, a married woman, engages herself in what seems to be an exciting affair with the handsome Captain Vronsky. On account of the affair, Anna betrays her friends, family, and her child. She loses all social status in Russia, whereas Vronsky, being a man, does not. Anna’s social alienation causes her to become lonely and jealous, and thus she demands all Vronsky’s time.

Eventually, as she looks around her, she can only see the bad news—the bad in her life, her friends, and even people simply walking down the street. In a final act of desperation, she throws herself in front of a train ending her life.

How to Fight Lust in Our Own Lives

Of course, lust does not always lead to complete destruction, suicide, murder and/or physical injury. However, many truths are woven throughout Anna’s story, and the stories from Homer and Austen, that are still relevant today.

First, one must see through the false beauty of unrestrained romantic passion. Lust blinds one to its negative and evil consequences, but the blindness comes to an end when dark consequences set in.

Secondly, one must challenge the urges of lust at their beginning when they may be strong, but still manageable. Allowing those urges to grow will almost always, as in the case of Anna, become unmanageable—and when this happens, blindness will ensue, followed by an inauthenticity to self and the hypocrisy of blaming others for our misdeeds.

Thirdly, the mythical world painted by unrestrained romantic passion will almost certainly come to a hurtful end. This is caused by the narcissism of one or both parties, the jealousies and anger generated by inauthenticity and infidelity, and the confusion and destructiveness caused by the rupturing of commitments and families.

The ideal of a romantic relationship is to bring intimate friendship to its highest level and make the intimate friend a number one priority through an exclusive and life-long commitment. It is to enter into a mutually supportive and collaborative common cause toward family and other positive objectives that will serve not only friends, but community, culture, church, and the Kingdom of God.

Lust does just the opposite. Let us heed the warnings in literature and avoid lust at all possible costs. To learn more about this deadly sin (and how to overcome it), check out Fr. Spitzer’s paper, “The Deadly Sins.”

Walker Percy, MD, and the Diagnosis of a Secular Age