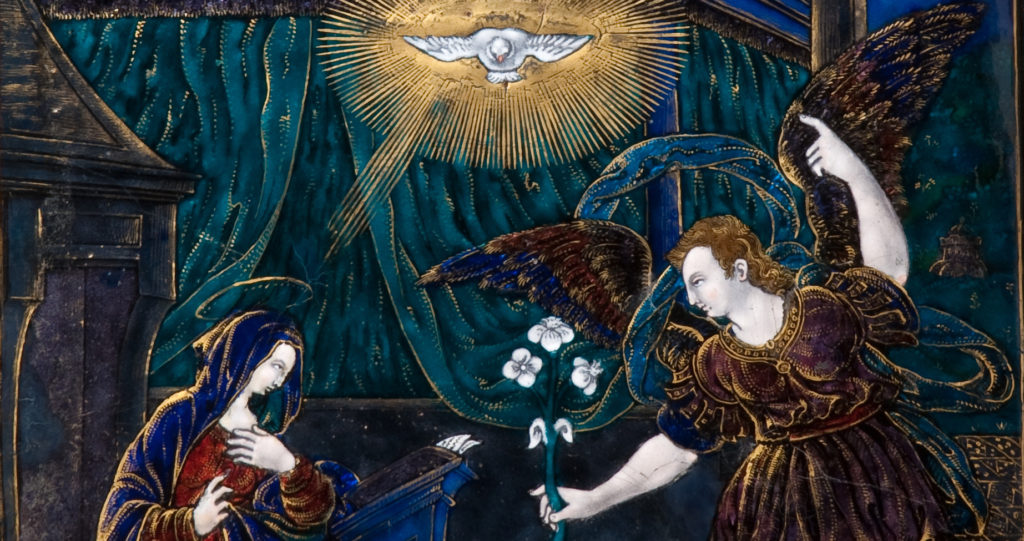 And Mary said to the angel, “Are you kidding me?  No way!” Thus she asserted her autonomy and liberation. She would never assent to being the mother of a son before whom she must kneel. Mother of God? No…. too much! She had other plans for her life and firmly committed to her enduring motto, “You just do you.”

Now before you get too upset with me for even proposing this preposterous narrative, let me suggest that a flat Mariology, one that reduces Mary of Nazareth to a boring and submissive holy robot, has lived in the popular imagination for quite some time. There is this latent idea that Mary was simply swept along into the plan of God. To many it seems that her destiny from conception meant that her choices, even and especially to ascent to being Mother of God, were a sort of fate or doom. It might further seem that her sinlessness made Mary boring, predictable and even dour.

Perhaps this is because somewhere along the line many of us have bought into some seriously misguided ideas: that motherhood is a drag and that sin is what makes life exciting. Contrary to this is the authentic Mary, the one the Gospels and the tradition of the Church presents to us. She is the freest and most empowered woman who has ever walked the face of the earth, but if we aren’t careful, we might just miss that reality altogether.

To understand who Mary is a bit more deeply,  let’s ask a productive question: Could Mary have said “no” to the angel Gabriel? Could she have said something like, “Are you kidding me? No way?”

Strong as Death and Relentless as Hell

Answering this question well will lead us to take a deeper look into the eyes of the Virgin of Nazareth. If we dare to do so we will not find a doe-eyed automaton, but the blazing fire of the Holy Spirit burning brightly within an empowered and free woman. We will see in the eyes of the Virgin, Mother, and Queen an unquenchable gift-of-self as stern as death and more relentless than hell (Song of Songs 8:6). Mary’s fiat, her “yes,” is a battle cry of freedom and a sign of unwavering commitment to her mission in every season of her earthly and heavenly life. In her eyes we will see the adventure of self giving love and the genius of womanhood come to full stature.

We have been led to believe that self assertion—imposing our will on the world—is empowerment, and that a gift-of-self, a “yes” to the plan of another, especially of God, is a weak and uninteresting thing. Informed by the spirit of our culture, we have been led to perceive that motherhood entails some sort of inferiority and is a trap that holds women back from real progress. It is easy enough to see where this is coming from. It is true that through the ages women have been victimized by a great theft of their dignity, have been objectified, commodified, and robbed of liberty. These have been embedded cultural norms since Genesis 3.  It is easy enough to see why it would seem that the recovery of dignity and assertion of liberty must come from the grasping of control, a refusal, a rebellion that militantly declares, “I will not serve.”

A Life of Yes to Freedom

But with some further thinking and interior clarity we can see that this is not the case at all. The power to say “no” is an important part of freedom. We ought to exercise that power in the face of those who seek to use, objectify, and take from us. We must be free to say “no” to those who are out to take away our freedom, identity, and worth. This ”no” however, is not itself the goal of liberty. We say “no” to preserve ourselves for “yes.” We must be able to make an offering of ourselves, to return love for love, to ascent to a mission. “Yes” is not a forfeiting of freedom, it is the fulfillment of freedom that Mary epitomizes.

So could Mary have said, “no?” Let’s start by saying that she was completely free and that her freedom gave her power to choose. In that sense … sure. She could have said whatever she chose to say. God did not program her to do his will like some kind of holy robot. He made her to be a free woman with the power to love. Mary was not less human because of her sinlessness, she was more human; a New Eve who revealed the adventure of womanhood in dazzling clarity.

What is also true about Mary’s authentically free personality is that her power to choose was unwaveringly pointed toward self-giving love. So that while she could have said, “no,” she just wouldn’t have. Her whole being was pointed toward a “yes” to God’s plan and was pointed in that direction in absolute freedom. This didn’t begin in Luke 1, it began with the moment of her conception and stretched from her infancy into her young adulthood and finally to a heavenly throne. It passed through hundreds of mornings rising early to pray and through hundreds of mundane Tuesday afternoons. The “yes” that Mary made to the angel was a harmony with her whole life.

Saying she wouldn’t have said ”no”  is different from saying that she couldn’t have. Like any bride she gave herself freely, totally, faithfully, and  fruitfully. Like any bride she could have said “no” at the altar. And as with any bride who has prepared for and has longed for her wedding day, it hardly surprises us when she says, “yes” and when that “yes” comes with great joy (See Luke 2:46-55).

I think our hang ups are pretty firmly rooted in the idea that holiness is boring. With Mary’s “yes” came a thousand adventures and all of the real flesh and blood day to day challenges of marriage, motherhood, and family life. With her, “yes,” came the full flowering of a confident, joyful, empowered woman radiating the love of God in every season of life.

Our best chance of getting to know the wild adventurous heart of Mary is to spend time with her. When you finish this article, close your eyes and imagine you are looking into her eyes, then follow the lead of Gabriel and say, “Hail Mary … ”

Waiting for God After Your Fiat