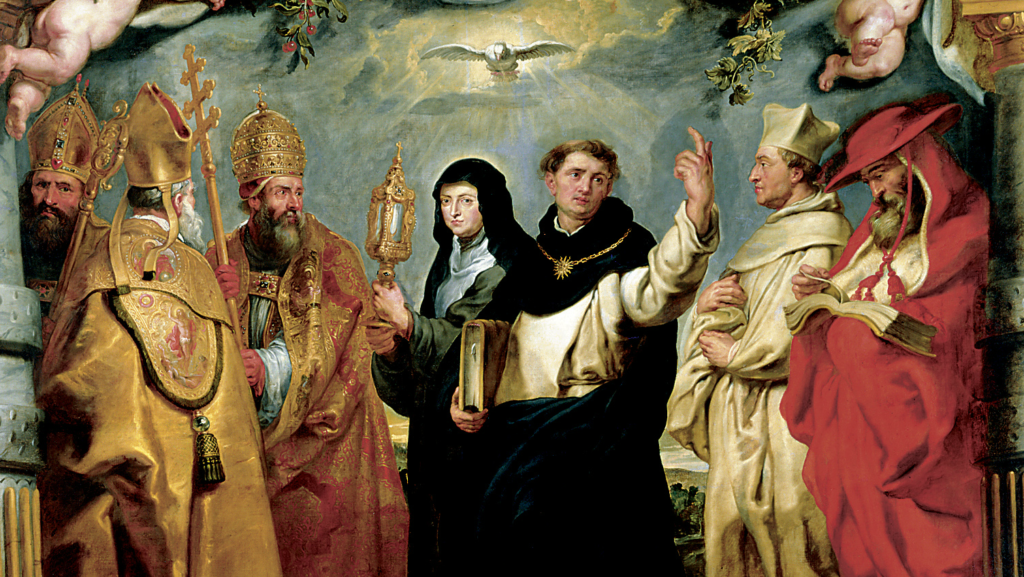 As a Baptist taking tentative steps toward the Catholic Church, the first theological domino to fall, for me, was two thousand years of consistent, adamant, historical Church teaching on the Eucharist. 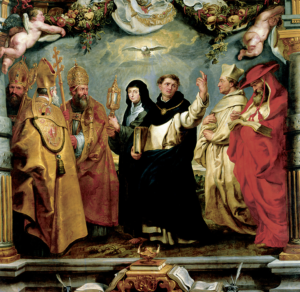 I accepted Eucharistic teaching immediately upon the testimony of the Scriptures and the Church Fathers. The historical interpretation of John 6, to which I had never before been exposed, seemed painfully obvious as soon as I heard it! As Pope Leo XIII stated in his encyclical “On the Study of Holy Scripture”:

“The Holy Fathers, we say, are of supreme authority, whenever they all interpret in one and the same manner any text of the Bible, as pertaining to the doctrine of faith or morals; for their unanimity clearly evinces that such interpretation has come down from the Apostles as a matter of Catholic faith” (Providentissimus Deus, 38).

“We receive those doctrines which they thus teach, not merely because they teach them, but because they bear witness that all Christians everywhere then held them” (John Henry Newman on Antichrist in the Church Fathers, 45).

Many Catholics and non-Catholics believe the Catholic Church invented the doctrine of transubstantiation: the “change of substance,” wherein bread and wine retain the appearance of bread and wine, but change by the power of the Holy Spirit into the Body, Blood, Soul, and Divinity of Christ at the consecration.

But the Real Presence is taught by St. Paul:

“For as often as you eat this bread and drink the cup, you proclaim the Lord’s death until he comes. Whoever, therefore, eats the bread or drinks the cup of the Lord in an unworthy manner will be guilty of profaning the body and blood of the Lord” (1 Corinthians 11:26-27).

How could one ever be guilty of profaning the Body and Blood of Christ if they are merely wine and wheat, even blessed or prayed over wine or wheat?

The Real Presence was taught by the twelve apostles.

“Let no one eat and drink of your Eucharist but those baptized in the name of the Lord; to this, too the saying of the Lord is applicable: ‘Do not give to dogs what is sacred” (Teaching of the Twelve Apostles, or Didache, 9:5).

The Real Presence was upheld by early Christians.

It was upheld by St. Ignatius of Antioch in the first century:

“Consider how contrary to the mind of God are the heterodox in regard to the grace of God which has come to us . . . They abstain from the Eucharist and from prayer, because they do not admit that the Eucharist is the flesh of our Savior Jesus Christ, the flesh which suffered for our sins and which the Father, in His graciousness, raised from the dead.” (St. Ignatius of Antioch, Letter to the Smyrnaeans, circa 90 AD).

It was upheld by St. Justin Martyr in the second century:

“This food we call the Eucharist, of which no one is allowed to partake except one who believes that the things we teach are true, and has received the washing for forgiveness of sins and for rebirth, and who lives as Christ handed down to us. For we do not receive these things as common bread or common drink; but as Jesus Christ our Savior being incarnate by God’s Word took flesh and blood for our salvation, so also we have been taught that the food consecrated by the Word of prayer which comes from him, from which our flesh and blood are nourished by transformation, is the flesh and blood of that incarnate Jesus” (St. Justin Martyr, First Apology, circa 150 AD).

It was upheld by St. Clement of Alexandria in the third century:

“The one, the Watered Wine, nourishes in faith, while the other, the Spirit, leads us on to immortality. The union of both, however, – of the drink and of the Word, – is called the Eucharist, a praiseworthy and excellent gift. Those who partake of it in faith are sanctified in body and in soul. By the will of the Father, the divine mixture, man, is mystically united to the Spirit and to the Word” (St. Clement of Alexandria, The Instructor of the Children, circa 202 AD).

It was upheld by St. Cyril of Jerusalem in the fourth century:

“Since then He Himself has declared and said of the Bread, (This is My Body), who shall dare to doubt any longer? And since He has affirmed and said, (This is My Blood), who shall ever hesitate, saying, that it is not His blood?” (St. Cyril of Jerusalem, Catechetical Lectures, circa 350 AD).

“I wish to add something that is plainly awe-inspiring, but do not be astonished or upset. This Sacrifice, no matter who offers it, be it Peter or Paul, is always the same as that which Christ gave His disciples and which priests now offer: The offering of today is in no way inferior to that which Christ offered, because it is not men who sanctify the offering of today; it is the same Christ who sanctified His own. For just as the words which God spoke are the very same as those which the priest now speaks, so too the oblation is the very same” (St. John Chrysostom, Homilies on the Second Epistle to Timothy, circa 397 AD).

St. Ambrose of Milan also upheld it in the fourth century:

“Thus, every soul which receives the bread which comes down from heaven is a house of bread, the bread of Christ, being nourished and having its heart strengthened by the support of the heavenly bread which dwells within it” (St. Ambrose of Milan, Letter to Horontianus, circa 387 AD).

St. Jerome was also among the Church Fathers who upheld it:

“After the type had been fulfilled by the Passover celebration and He had eaten the flesh of the lamb with His Apostles, He takes bread which strengthens the heart of man, and goes on to the true Sacrament of the Passover, so that just as Melchisedech, the priest of the Most High God, in prefiguring Him, made bread and wine an offering, He too makes Himself manifest in the reality of His own Body and Blood” (St. Jerome, Commentaries on the Gospel of Matthew, 398 AD).

St. Augustine of Hippo was also among them:

This necessarily brief, and woefully incomplete, selection of quotes from the writings of the early Christians proves that the Catholic Church did not make up Eucharistic teaching; it was handed to her from Jesus through the apostles as the foundation of the New Covenant and Deposit of Faith.

The one, holy, and apostolic Church still holds, teaches, and guards the Real Presence.

“The mode of Christ’s presence under the Eucharistic species is unique. It raises the Eucharist above all the sacraments as ‘the perfection of the spiritual life and the end to which all sacraments tend.’ In the most blessed sacrament of the Eucharist ‘the body and blood, together with the soul and divinity, of our Lord Jesus Christ and, therefore, the whole Christ is truly, really, and substantially contained.’ ‘This presence is called “real” – by which is not intended to exclude the other types of presence as if they could not be “real” too, but because it is presence in the fullest sense: that is to say, it is a substantial presence by which Christ, God and man, makes himself wholly and entirely present” (Catechism of the Catholic Church 1374).

Jesus Answers My Prayer with Himself

As a Baptist, I had prayed desperately to Jesus to be closer to him. “Surely there is some way we can be closer!” I thought. I meant literally. Through these writings and many others, I came to know that Jesus was leading me to my answer in the Eucharist. Jesus’ Eucharistic presence was and remains, for me, both surprise and gift.

Never Forget: A Reflection on Holy Thursday and the Eucharist