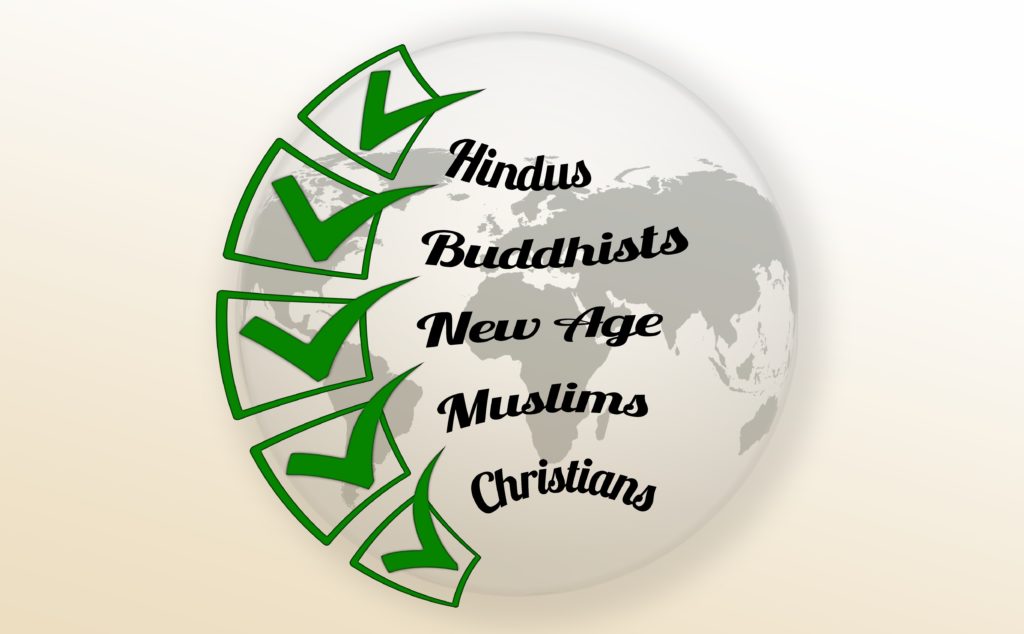 When talking with friends and acquaintances today, it’s rare to meet anyone who actually despises and hates religion. People may scoff at certain tenets of a religion or, perhaps, hold onto the faith of their parents in a cultural way, but actual hate is rarely seen except on social media comment boxes. 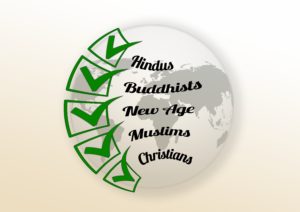 Because of this, I would argue that the bigger threat to souls, at least in most of the Western world, does not come from militant atheists, but from indifferentism. The biggest danger comes from apathy. Many millennials and Generation Z’ers just don’t care enough to dig deep and really think about what’s “out there”. Unfortunately, it seems that the most innocuous things can make people start to contemplate these matters, but in a very incomplete way. The best such people can offer then is the mantra “every belief structure is right in its own way”. Therefore, moral relativism reigns supreme, as it is presupposed that one can never know what truth is, meaning it really doesn’t matter what religion you subscribe to in the end.

I came across a work demonstrating this that has led some to contemplate human existence, and I quickly found that almost all it has done is reinforce the apathy towards God and religion that so many people hold today. It was found in the form of an internet meme, and a pretty long one at that. The meme is actually a short story entitled “The Egg” by author Andy Weir. He rose to fame from his sci-fi novel The Martian, which was adapted into a motion picture in 2015. However, Weir is usually uncredited in the myriad of places his story has shown up in, and most of the memes that present the story claim that it presents “Philosophy … to the max”. While it’s a well written short story, many people have latched onto the idea that “The Egg” is an excellent way to think about creation and the universe. It is not.

The story is about a man who dies in a car accident, and meets a being who purports to be “God”. The God character tells the man he will be reincarnated, and will keep being reincarnated until he has lived the life of every person who has ever lived, is living, or will ever live on earth; because by then he will be sufficiently mature.

The conclusion is that the universe is simply an egg for this person to mature in. However, this person is simultaneously Hitler and Abraham Lincoln. Therefore, our actions do not have any real consequences. In addition, the God character comments that “All religions are right in their own way.” Not to mention, the typical nonsense of God being a woman comes into play again, because it’s everyone’s favorite thing to disregard the fact that God has revealed himself to humanity as “Father”. There’s also what appears to be a nod to the Mormon doctrine of “exaltation” (the notion that man will become a god), but for our purposes we’ll be focusing on one main error here: moral relativism and the notion that “all religions are right in their own way,” which is where Weir’s story leads us.

While the story can definitely lead one to ponder life’s meaning, in the end, the logic is faulty. My biggest problem with the story is this: If all religions are correct, as the God character affirms, how do we determine what is “right”? We see various religions and secular religions (like Marxism or Communism, for example) completely contradict each other on a myriad of subjects. If they’re all “right” and “correct” then we have nothing available to measure its “rightness”.

If everything in our universe is subjective (all “truths” are right), then there cannot possibly anything existing that is objective (this action is right and this action is wrong). By writing this thought-provoking blurb, the author has basically stated there is no such thing as absolute, objective truth; therefore, “God” contradicts himself when he says “all religions are right in their own way”, because he has made it clear that there is no yardstick in the universe to measure the “rightness” or “wrongness” of any action.

For instance, certain schools of Islam, such as Sunni Muslims who subscribe to Wahhabism believe that is permissible to wage jihad by murdering those who do not submit to conversion to Islam. They also believe it is permissible to capture and rape the women who are not Muslim, and they become their milk al-yamin, or sex slaves. Not only are these two actions permissible, they are seen as a good, and seen as right, which leads to more glorification for the Muslim man in the afterlife. In contrast, many religions, as well as secular philosophies, see murder and rape as wrong and evil.

Also, in the Mesoamerican religion of the Aztecs, human sacrifice was thought to be a good, as death and sacrifice was believed to be necessary to keep the world in existence. The sacrifices would come from those who were captured during war, as well as from the children of the native population. These people would be sacrificed and killed against their will, yet the Aztec priests saw this as a good, and saw this as the right thing to do. In contrast, most religions and secular philosophies see child sacrifice and the ill treatment of war criminals as wrong and immoral.

In addition, members of the Westboro Baptist Church believe that God hates certain groups of people, and desires their death. However, this is contradictory to what other Christian religions believe; that is, that the Abrahamic God is love itself, and that God loves everyone despite how people choose to live their life of their own free will.

We could rightfully ask the following:

As we can see you can’t call something “right” or “moral” or “truthful” if you don’t have a way to measure it. You can’t have your cake and eat it too. By declaring that all religions are right, we deny that there is any way to subjectively determine what is right since all religions are “right in their own way”. This is circular logic.

Of course, we can’t have it both ways. Either there is no such thing as “right” or “wrong” and all our actions have no “good” or “bad” meaning, or there is some way to measure what truth is and what “rightness” is.

And if the latter is true, then this is where real philosophical thought takes us; which perspective and philosophy on life is correct? After examining all the different perspectives out there (religious or secular), which can we determine is correct?

At this point, some might say, perhaps, the story is implying that part of each religion is right while some (or most) of the religion is wrong or evil. Well, the only problem with this theory is that the vagueness inherent in the statement “all religions are right in their own way” contributes to that moral relativism that is very prevalent in our culture.

The author is saying that in practicing any one religion, you will be on the right path no matter what since all of these religions are “right” in their own special way. But again, there’s no barometer to measure what is right and what is wrong if everyone is correct in their theology and philosophy. It presupposes there is no such thing as absolute truth.

What is being said here is different from affirming that there are certain aspects of a religion that are morally right and true. I actually wholeheartedly agree with that notion; every religion has something good and true in it, even if it is mainly false or evil. More on that in a bit. The author, however, is subscribing to the “God on the mountaintop” perspective; that is, God sits on a mountaintop, and there are many different ways to get to the top. Whatever way you choose is fine, just so long as you get there.

For example, Jews, Christians and Muslims all worship the Abrahamic God. But they all have very different understandings of God. Jews and Christians recognize God as “Father” or “Abba” which literally translates to “Daddy”. Muslims completely reject this notion (that God could have adopted sons and daughters) as blasphemous, since they believe speculation and study on God’s nature is to be rejected and avoided. In the same way, religions such as Buddhism and Christianity have very different understandings of salvation and the afterlife.

Think of it like finishing a Rubik’s Cube: there’s one goal, and that is to have solid colors on each of the cube’s six faces. That’s the only way you can say you’ve finished the puzzle. If I get part of it done and have only six out of nine blue tiles on one side complete, and say “Well hey, it’s right in its own way. I believe this is the correct way to complete a Rubik’s Cube!” am I correct? Of course not. My thinking contradicts reality. Just because I think it’s right the way it is doesn’t take away from the fact that the cube wasn’t completed correctly. The only way to correctly finish it is to have nine blue tiles looking at me. However, I have done something right; instead of having only two or three blue tiles looking at me I have doubled that amount. A part of what I was doing was on the “right” track.

Which leads me back to what I mentioned earlier: All religion has something right and good about it. This is different from what Weir’s story puts forth. Each religion has something right about it, but since truth can’t contradict truth, only one of them can possess the fullness of truth or “rightness”. This is why Jews and Buddhists can both agree that murder is evil, yet completely contradict each other elsewhere.

There’s a really good video about this from the Venerable Fulton J. Sheen on comparing world religions. He believed that all religions had good in them, a certain degree of truth and rightness. He explained that truth was like a circle, and a full circle is made of 360 degrees. He said, “A religion that started in Los Angeles just this afternoon has some good in it. It only has 10 degrees, but it’s got some good.” He makes some great points, and I would argue those points are “philosophy to the max”. We need to get those who are indifferent to religion—the “nones”—reflecting on something deeper, something that doesn’t preach moral relativism. Step by step, we can instead preach to them the Truth, which is ultimately found not in a short story, but in the pages of the Gospels.

Moral Relativism and the Culture of 'Meh'
Is the 'Yanny or Laurel' Debate Disguised Relativism?
Ascension Roundup May 25-31
How Individualism Prevents Christian Unity
Has Ascension's free media strengthened your faith?
You can now offer ongoing support for this content with a recurring gift.
Support Ascension