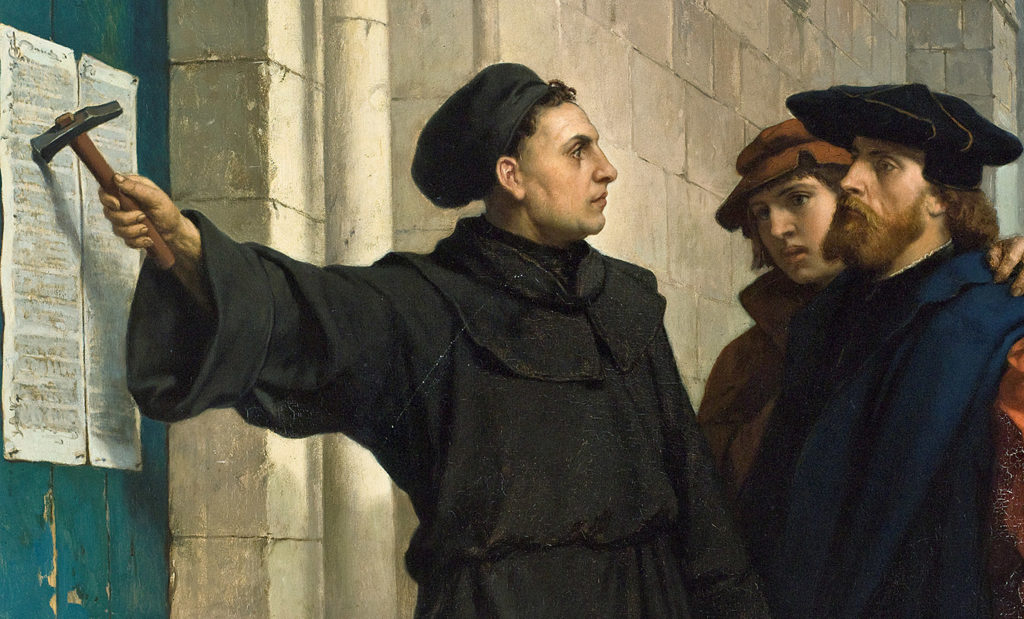 The 500th year anniversary of the Reformation is upon us, dating back to October 31, 1517, a date which marks Martin Luther’s posting of his 95 theses. This action, however, was not of itself extraordinary. Posting theses—and calling for debate, and sometimes being critical of this or that Church practice—was something academics did then, as they still sometimes do today. We look back upon this event as a key turning point; but no one at the time would have said that Martin Luther had just launched the Reformation. 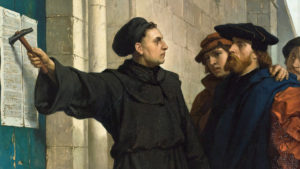 One of Luther’s key complaints was over the sale of indulgences, with its obvious opening for abuse. While there were problems and reform was needed, one general question we can pose as Catholics is to ask what’s the difference between Erasmus (a Catholic who sought reform) and Luther? That is, several Catholic thinkers had many of the same concerns as Luther, but sought to reform the Church from within, without breaking away.

In hindsight, the Church seemed slow to react to Luther, not realizing the full extent of what was unfolding; but had the Church reacted sooner, as one of my former graduate professors once proposed, perhaps Luther could have started a new religious order (and thus remained Catholic), one with an accent mark on the primacy of grace and some of his characteristic emphases. One thing I’ve said to Catholics who express a desire to leave the Church over perceived problems or sins of its members is to ask: Do you want to be part of the problem or the solution? In other words, leaving the Church is the easy way out; on the other hand, cultivating hard fought discipleship and communion with our Lord is the path to real reform which fosters the true health of the Church.

While the practice of indulgences at the time of the Reformation needed reform, the theology of indulgences runs very deep and actually unveils some of the most beautiful aspects of the Catholic Faith. In other words, yes, the Church still believes in indulgences.

In order to come to grips with the Church’s teaching on indulgences, one must first understand the Catholic teaching on the two-fold consequence/punishment of sin: namely, the eternal and the temporal. The eternal consequence of sin refers to hell, the permanent separation from God by persisting in a state of unrepentant mortal sin. Thus, the eternal aspect refers to whether or not we are forgiven. The temporal consequence of sin, on the other hand, refers to the way in which our sins wound us.

The way I often frame this for my students is to emphasize that God wants not only to forgive our sins, but to heal and transform us. If we were to imagine our sins as nails driven into a piece of wood, and forgiveness as the removal of those nails, we would still be left with holes in the wood where the nails previously were. In other words, the work of God is not complete upon mere forgiveness, but seeks to go further through healing and transformation accomplished by supernatural grace (i.e., filling in the holes of the wood). In this light, the Catechism of the Catholic Church explains: “These two punishments [eternal and temporal] must not be conceived of as a kind of vengeance inflicted by God from without, but as following from the very nature of sin” (CCC, 1472).

The classical moral philosophers understood this clearly: the choices we make—especially over a period of time—modify our character at ever-deepening levels. Just as an athlete, musician, or student of foreign language knows, practicing things the right way over a period of time inculcates deep habits, freeing us to be more adept at performing at a high level with consistency, with relative ease, and even with joy. But if we practice with poor mechanics (or poor grammar), we will eventually be more likely to do it the wrong way the next time. In this sense, practice makes—if not perfect—more and more permanent (for more here, see my book, John Paul II to Aristotle and Back Again).

To give one more analogy, sometimes when my kids get in trouble, they’ll quickly say they’re sorry—to which I respond both with my forgiveness and their punishment. And on occasion they have said, “Why do I need a punishment—I thought you forgave me?” As a theologian and a father, I explain that I give a punishment because I not only want to forgive them, but to heal and transform them. The punishment is not for them to earn my forgiveness back, but to redress the disorder wrought in their own souls by the wrongdoing. By analogy, then, my forgiveness is like dealing with the eternal consequence of sin; and the punishment I give is analogous to God’s effort to address the temporal consequence of sin, the way in which our sin wounds us.

This twofold consequence of sin can be seen in two biblical examples, the wilderness generation and David. In Numbers 13-14 (when Moses sends the twelve spies into the Promised Land, ten of whom come back fearful and scare the people into not wanting to set foot in the Promised Land), God forgives them of their sin, but still metes out a temporal punishment, namely, the 40-year wilderness wandering (see Numbers 14:20-23). And after David has an affair with Bathsheba and has her husband Uriah killed, he confesses his sin to Nathan. Nathan assures David of the Lord’s forgiveness, but also informs him of the temporal punishment to follow: the child conceived in the adulterous affair will perish (2 Samuel 12:13-14).

Purgatory, for example, is not a second chance or a middle ground. Rather, purgatory is for those who die in friendship with God (i.e., the eternal consequence of sin has been dealt with), but not yet completely purified (i.e., some of the temporal consequence of sin remains). God begins his work of transformation in us now; if left incomplete upon death, he will complete it in a state called “purgatory” (see CCC, 1030, 1054). This transformation is necessary for us to enter fully into communion with God and the joy that it entails.

Importantly, indulgences have nothing to do with the eternal consequences of sin. That is, the Church has never taught anything like “you can buy your way to heaven.” Rather, indulgences are a lessening of the temporal punishment due to sin. Analogously, it’s as if I assigned one of my children a thirty-minute timeout and later reduced it to fifteen minutes.

Hence, the Catechism explains: “An indulgence is a remission before God of the temporal punishment due to sin, whose guilt has already been forgiven” (CCC, 1471, emphasis mine).

The second pillar which underlies the doctrine of indulgences is the communion of saints—the unity we all share in Christ. No man is an island; both our sins and our merits affect the entire Body of Christ.

With regard to merit, it’s important to recognize what this means. It is not a proportionate system whereby we do certain good works and simply earn our way to heaven, as if God literally “owed” us something. Rather, Jesus merits our capacity to merit, and the same is true of Mary and all the saints. It’s not the work itself that merits, but the relationship established in and through Jesus Christ. In other words, good works done in Christ—as a son or daughter—are meritorious in God’s eyes. It’s sort of like a child “earning” an allowance. It’s not the chore itself that earns the money, as if the employment opportunity were open to any kid on the block. It’s the familial relationship that makes the allowance (or merit) possible in the first place. We “merit” by good works only because God has first adopted us into his family through the person and work of Jesus Christ, and so God looks upon these meritorious works as those of a son or a daughter, not a mere creature or servant.

This then leads us to the “treasury of merit,” from which the Church draws upon to grant indulgences. This treasury refers to the infinite value of Christ’s work (and by extension, the meritorious works of Mary and all the saints in Christ) in the eyes of the Father: “[T]he treasury of Church is the infinite value, which can never be exhausted which Christ’s merits have before God” (CCC, 1476).

In the communion of saints, we all share in each other’s merits: “In this wonderful exchange, the holiness of one profits others” (CCC, 1475).

What the Church does, then, in administering an indulgence is apply the treasury of merits (that of Jesus and all the saints) to one of her children, under certain prescribed conditions (e.g., reading the Bible for thirty minutes). Again, this application does not affect the eternal consequences of sin—i.e., it will not save one who is unrepentant and not in communion with our Lord. Rather, the application concerns the temporal consequences of sin, an application that flows from the unity of the family of God and the way in which the merits of one sibling (e.g., a saint) can be applied to others (e.g., the pilgrim Church on earth).

For a biblical analogy, we might look to Noah and Abraham. Notice how their individual righteousness affected so many others. For Noah, his three sons, and their wives all enter the Ark—because of Noah’s holiness. And through Abraham’s act of righteousness, God promised to bless the entire world (see Genesis 22:16, 18). Indeed, one person can make a difference. We have no idea how important our smallest act of charity really is in the eyes of God.

Some acts which have indulgences attached to them are reading the Bible piously for at least thirty minutes; eucharistic adoration for at least thirty minutes; or making pilgrimages to various holy sites (e.g., the Holy Land). The same is true of Pope Francis’ Year of Mercy and the visiting of designated holy doors, as well as various Jubilee years the Church has proclaimed.

Lastly, people often wonder about the “days” language with reference to purgatory—that is, why traditional piety used to associate indulgences with, say, 500 days off purgatory. The reason for this language is because purgatory is in some ways a continuation of the penance done here on earth, dealing with the temporal consequence of sin; and at certain times, for example in the early Church, earthly penances were very long. Thus, the temporal specification of an indulgence (e.g., 500 days) originated from the reduction of a penance that was being done here on earth. Since there is an analogy and continuity between the penance done here and purgatory, the time references were easily transferred to purgatory.

But since time doesn’t function in purgatory the same way it does here, the Church no longer speaks in terms of how many “days” an indulgence takes off. Rather, the Church speaks of “plenary” and “partial” indulgences, “as [they] remove either part [hence, partial] or all [hence, plenary] of the temporal punishment due to sin” (CCC, 1471).

How can we better realize how important the drama of our lives really is in God’s eyes, especially in the little things? No matter how “behind the scenes” we think our lives are, we are on the front lines of a spiritual battle that has eternal consequences, affecting not just us but the entire Body of Christ.

Did the Church Ever Sell Indulgences?