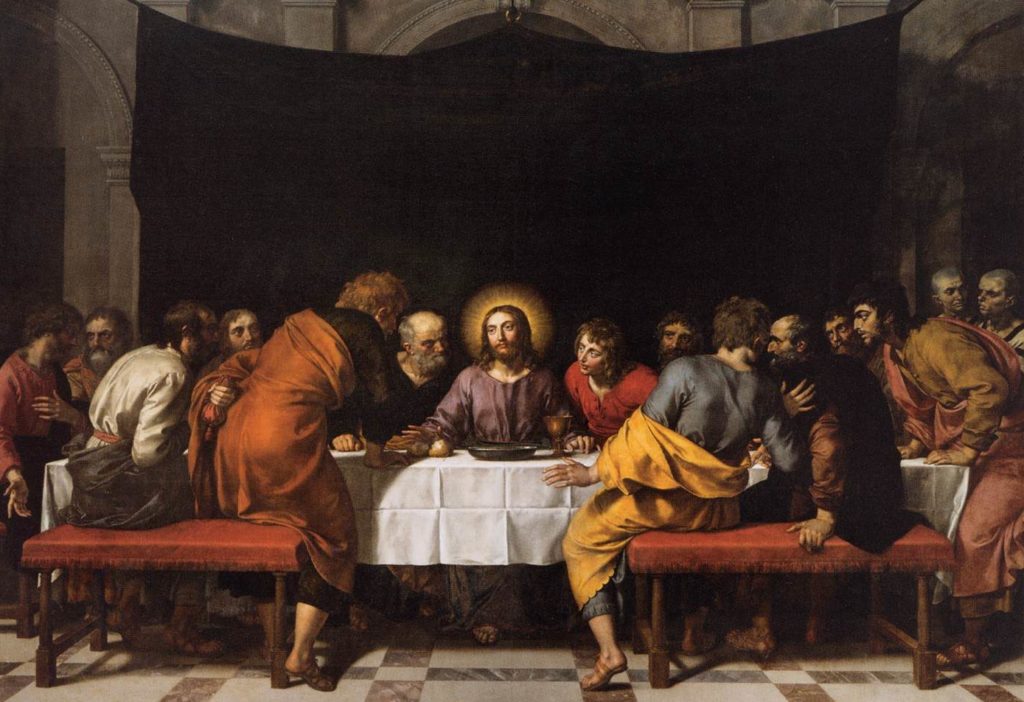 According to the Catechism of the Catholic Church, “As an old saying put it, the New Testament lies hidden in the Old and the Old Testament is unveiled in the New” (CCC,129). The readings for Holy Thursday demonstrate this powerfully, highlighting themes of sacrifice, thanksgiving, and charity.

On Holy Thursday, the Church commemorates the Last Supper, which includes the institution of the Eucharist and the priesthood. The First Reading, instructions for the first Passover, is taken from Exodus. The Responsorial Psalm, taken from a psalm used for the sacrifice of thanksgiving, is intertwined with a response taken from St. Paul in First Corinthians: “Our blessing-cup is a communion with the Blood of Christ.” The Second Reading is taken directly from the First Letter of St. Paul to the Corinthians. There we read, “This cup is the new covenant in my blood. Do this, as often as you drink it, in remembrance of me” (1 Corinthians 11:25). The Gospel, telling us how Jesus washed the feet of his disciples at the Last Supper, is taken from the Gospel of John.

A Call to Sacrifice

The Second Reading, taken from First Corinthians, which was written around the year 53, is the earliest written account of the institution of the Eucharist in the Bible. The earliest Gospel was likely not yet written. As St. Paul says in the Second Reading, the new covenant is written in Christ’s blood. Partakers share in the new covenant through the cup. The Greek for remembrance, anamnesis, is associated in the Greek Bible with liturgical observance, efficacious for bringing the partaker into the mystery. Jesus here, with only the Twelve present, gives a command to hand on in a traditional practice: “Do this.” The priesthood is instituted along with the sacrament of his Body and Blood. This moment also makes Christ’s death a sacrifice for us, and not merely an execution or unfortunate event.

Pope Benedict XVI taught in a homily on Holy Thursday in 2007, “Thus, he anticipated his death in a manner consistent with his words: ‘No one takes [my life] from me, but I lay it down of my own accord’ (John 10:18). At the time when he offered his Body and his Blood to the disciples, he was truly fulfilling this affirmation. He himself offered his own life. Only in this way did the ancient Passover acquire its true meaning.”

Indeed, the Church provides interpretation for us in its placement of the Passover narrative from the Book of Exodus as the First Reading for Holy Thursday. There we read that God was to bring about judgment on Egypt, “striking down every firstborn of the land.” The Hebrews would be spared, if they did as the Lord commanded. They must take a lamb “without blemish … and then, with the whole assembly of Israel present, it shall be slaughtered during the evening twilight.” Thus it was a liturgical act, foreshadowing the pure and sinless Lamb of God.

There was no Levitical priesthood yet—just the priesthood of the firstborn male of each household. To be spared, all must “partake of the lamb.” They must also cover their “doorposts and the lintel of every house” with its blood. In like fashion, we partake of the Eucharist, and in baptism, we are covered with the Blood of Christ. The appearance of bread, and especially the flat wafer, is taken from the unleavened bread they were commanded to eat, since they were to escape on foot, not taking time to even allow the bread to rise. Likewise, those who partake of the Eucharist are wayfarers on a journey to a Promised Land.

The Passover was to be an everlasting liturgical memorial. We read, “This day shall be a memorial feast for you, which all your generations shall celebrate with pilgrimage to the LORD, as a perpetual institution” (Exodus 12:14). For Pope Benedict, the Eucharist perpetuates the Passover for all time. He teaches, “it lives on for ever in the Blessed Eucharist in which, down the ages, we can celebrate the new Passover with the Apostles.”

A Call to Thanksgiving

How shall I make a return to the LORD
for all the good he has done for me?
The cup of salvation I will take up,
and I will call upon the name of the LORD.

A Call to Charity

The person would then offer a lamb to be sacrificed, but it must be completely eaten before sunrise. In order to do so, the person would invite the poor to the banquet, to finish the lamb. Both leavened and unleavened bread and wine were also offered as part of the banquet and the sacrifice. Unlike the holocaust, in which all of the flesh was to be offered up in smoke to God, only some of the flesh was to be destroyed in this way in the thank offering. Thus this was a ‘communion’—a meal shared between God and God’s people. There was a communal dimension, since the person making the sacrifice would need to invite others to share in the banquet in thanksgiving for what the Lord had done. This would encourage the right internal disposition in the person to have a heart like God, sharing with those less fortunate in response for God’s mercy upon him. Thus we hear:

The Lectionary interprets for us the connection to Christ through the people’s response: “Our blessing-cup is a communion with the Blood of Christ.” Note also the literal meaning of Eucharist which is thanksgiving. We read in the Second Reading from First Corinthians, “Do this, as often as you drink it, in remembrance of me.” Then St. Paul explains: “For as often as you eat this bread and drink the cup, you proclaim the death of the Lord until he comes.” We offer Eucharist in thanksgiving for what Christ has already accomplished once for all. A new sacrifice distinct from the first sacrifice on the part of Christ is not made. What is added is for our participation in that sacrifice and also our heartfelt thanks and gratitude for what Christ has done in opening for us the gates of heaven through the shedding of his blood.

The Gospel reading is taken from John, which is the only Gospel not to include the institution of the Eucharist. Instead, John spends four chapters detailing the discourse at the Last Supper. This was the final formation for ministry for the first priests of the New Covenant. Jesus washed the feet of the apostles, taking the role typically given to the servant. Then he explains, showing the sacrificial nature of leadership in the New Covenant: “You call me ‘teacher’ and ‘master,’ and rightly so, for indeed I am. If I, therefore, the master and teacher, have washed your feet, you ought to wash one another’s feet. I have given you a model to follow, so that as I have done for you, you should also do” (John 13:34-35).

Partaking in the Eucharist is an act of thanksgiving and of partaking in the sacrifice that Christ offered. But it is also the energy for a life of self-giving. As Pope Benedict wrote in Deus Caritas Est, “A Eucharist which does not pass over into the concrete practice of love is intrinsically fragmented” (no. 14). Thus the readings for Holy Thursday move us to sacrifice, thanksgiving, and charity both in the Eucharistic liturgy and also in our lives.

Never Forget: A Reflection on Holy Thursday and the Eucharist

A Biblical Walk Through the Mass

Altaration: The Mystery of the Mass Revealed