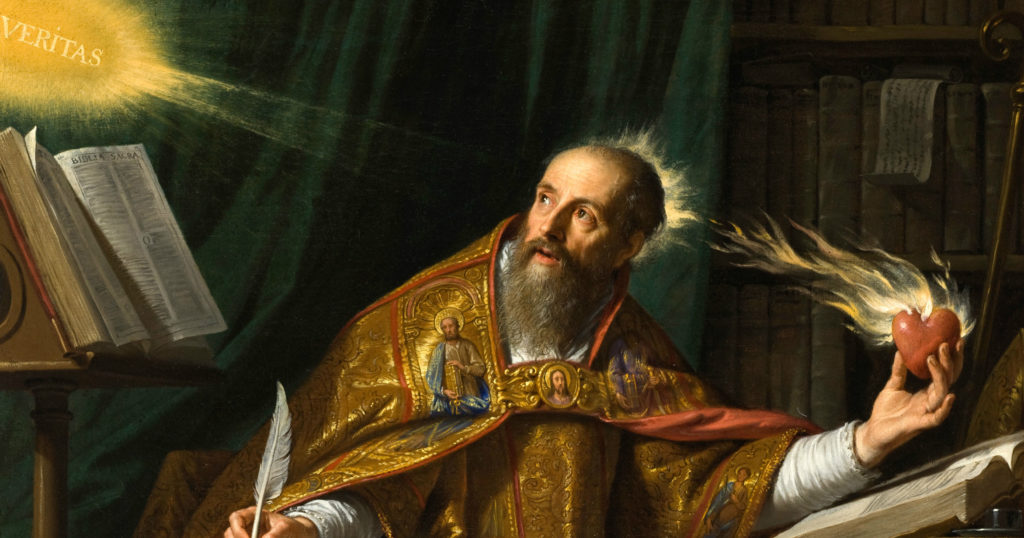 How many times have you sat down to read a passage of Scripture only to scratch your head and puzzle about what’s going on? Or, have you ever come across a troubling passage of Scripture and wondered how it could be inspired by a good and loving God? We’ve all had bad encounters with Scripture where it doesn’t make sense or seems wrong in some way. And many people have rejected or walked away from faith because of a bad experience with Scripture.

In fact, this was the experience of the great St. Augustine (354-430) whom we celebrate August 28. Augustine wrestled with Scripture early on in his intellectual formation and initially wrote it off. And it was a rediscovery of Scripture through the preaching of another saint that led him to convert to Christianity. Augustine’s experiences and insights can help us today as we still struggle to understand how the Bible was written and how to read it well.

In Book III of his famous Confessions, he speaks of his time as a nineteen-year-old student. He read Cicero’s Hortensius which extols the pursuit of wisdom through philosophy. This changed his life. He began to long for knowledge. This led him to read Scripture to see whether the wisdom for which he longed could be found there.

Yet St. Augustine left this initial study of Scripture dissatisfied. He said that after reading Cicero’s “dignified prose” the Bible’s simple, common style was offensive to his tastes and seemed to undermine the claim that it was intellectually sophisticated. Augustine expected that the wisdom of Almighty God should be presented in an eloquent and philosophical way. The fact that the Bible was written so poorly, both stylistically and philosophically, seemed to him evidence that it did not contain true wisdom. Throughout history, many have felt the same way.

As Augustine reflected on his early experience, he attributed his dismissal of Scripture to pride and ignorance, writing:

“my swollen pride recoiled from its style and my intelligence failed to penetrate to its inner meaning.”

He observed that Scripture is “not accessible to the scrutiny of the proud nor exposed to the gaze of the immature.” Rather, Scripture is a text that presents itself as “lowly” so that it can be read by the childlike and humble. Over time, its profundity and depth will become apparent to those who patiently study its pages.

At some point, or perhaps very often, we feel like Augustine did when he first read Scripture. We come to Scripture excited to be reading the Word of God only to come away feeling like it was overhyped. Scripture can be so disappointing, so frustrating, so ancient, so bizarre, so unclear. And we can ask ourselves: Is this really the Word of God? Shouldn’t a book inspired by God be more sophisticated, more clear, more exciting, more interesting, more compelling, more factual, more scientific, more relevant?

Augustine also gives us an insightful way of diagnosing our disappointment. He tells us that Scripture is written in a way that discourages or frustrates the proud while at the same time being accessible to the common person and delighting the humble and childlike. If we reflect on this observation, we can say a few things that might improve our approach to the sacred page.

Augustine tells us that if we approach Scripture in pride we will reject it prematurely, but if we approach it in humility, we will give it the benefit of the doubt and thereby spend enough time with it to start to see its deeper integrity. Here Augustine helps us see that while we might have many expectations of what God is like and how God ought to communicate to us, these notions are likely to have been distorted by sin. We might think God’s revelation must be elegant, sophisticated, and only understandable to scholars who can dissect its every word. But God of course came to earth as a baby in a humble manger, born to poor, peasant parents. If we are to get to know God and his priorities, our minds need to be converted from their preoccupation with worldly success, convenience, and pleasure. The way God speaks to us in Scripture is one of the ways God tries to heal us of our pride.

Augustine is aware of the fact that the proud go to Scripture looking for self-justification. There are those who think God or the Christian faith is silly and read Scripture in order to confirm their suspicion. Of course, they’ll find all the apparent contradictions, seeming inconsistencies, implausibility or absurdities. They will quickly dismiss Scripture and miss out on its riches and deeper coherence.

Others, who are enthusiastic to use Christianity as a way of feeling superior to others, will go to Scripture in order to be seen as virtuous or as a religious expert or to find a secret that only they were smart enough to discover. They might dismiss teachers and preachers as they feel themselves capable of being an expert on their own. They will use Scripture not as a means of knowing God and growing in holiness but as a weapon to use against those they wish to scorn and scold. But their reading of Scripture will be superficial and they too will miss the deeper majesty of Scripture. Eventually they too will become frustrated with the humility of Scripture.

A humble, childlike reader, however, will give Scripture time. He or she will be patient and teachable. He or she will see the apparent difficulties in Scripture not as indications of its inferiority but of his or her own limitations as a reader. Humble readers will memorize Scripture, as Augustine recommends elsewhere, and this familiarity will help them make connections and detect subtle patterns. They will find that the Holy Spirit brings Scripture to mind in times of trial and temptation. They will, indeed, see that God speaks to them through Scripture. They will seek to glean everything they can from Scripture, rather than use Scripture as a prop for their own ego.

Designed to Make Us Holy

Here we also need to recognize what Augustine says elsewhere in the book that became the manual for how to read Scripture in the Middle Ages. It’s called Teaching Christianity, and his major point is that the goal of reading Scripture is to grow in love for God and love for neighbor since these are the two commandments Jesus says summarize all of Scripture (Matthew 22:36-40). God writes Scripture in such a way as to give us the choice of whether or not he is worthy of our time. He gives us in the puzzles of Scripture the opportunity to trust him and to desire to learn from him on his terms, rather than to rush in and demand him to meet our expectations or answer our most pressing questions.

What St. Augustine helps us understand is that reading Scripture is an exercise of charity. Scripture is not accidentally unclear or difficult, because its authors were ancient or uneducated. Rather, it is deliberately written in a way that requires us to go out of ourselves and learn from God and his prophets and apostles. In coming to terms with the poverty of the text, we too practice becoming poor, learning the wisdom of God that the wise of the world sees as foolishness (see 1 Corinthians 3:18-23). When we read Scripture and find it frustrating, we need to pray for an increase in faith and charity. We need to stick with Scripture and keep giving it the benefit of the doubt. For, as St. Augustine-along with all the saints—discovered, Scripture has layers of meaning and is profitable for holiness.

Sing for the Love of God (Insights from St. Augustine)

Praying Scripture for a Change: An Introduction to Lectio Divina [Book]

Dr. James R. A. Merrick is Director of Emmaus Academic and Clergy Support at the St. Paul Center for Biblical Theology and Lecturer in the theology department at Franciscan University of Steubenville. In addition to Ascension Press, he writes for the National Catholic Register, Angelus News, and Exodus 90. Follow Dr. Merrick on Twitter: @JamesRAMerrick.

Featured image of “Portrait of Saint Augustine of Hippo receiving the Most Sacred Heart of Jesus, by Philippe de Champaigne, 17th century” sourced from Wikimedia Commons