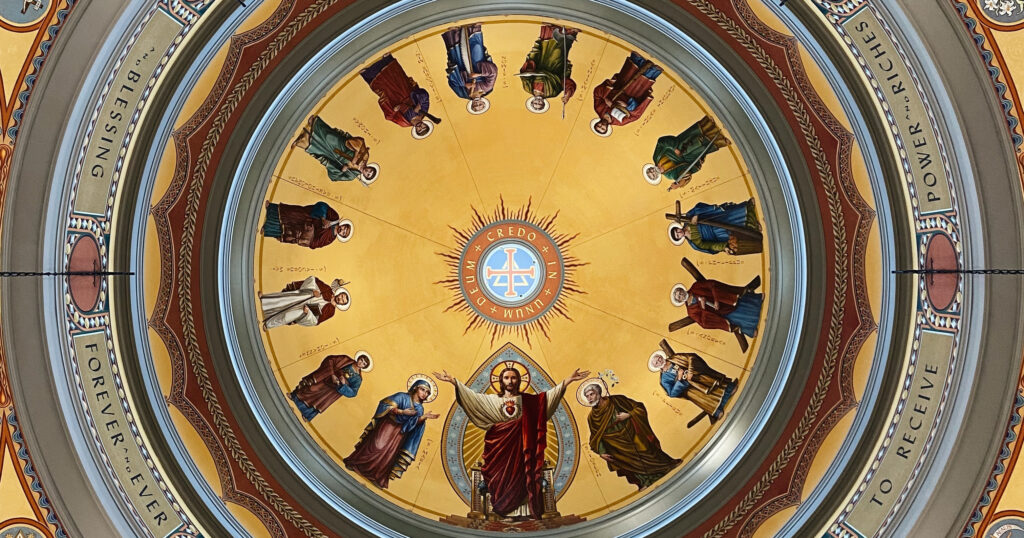 I grew up in a faith tradition that called all of its members “saints.” That’s not such a far-out concept when you look at the New Testament texts. St. Paul referred to members of the Body of Christ as “saints” over forty times in his letters. What does the Church teach about the saints and who is included in that reality we call the communion of saints? I can’t think of a more auspicious time to reflect on this than the Feast of All Saints.

Saints in the Scriptures

In the New Testament, the Greek word hagios (most often translated as “saints”) can generally refer to any sacred person or object that is set apart or consecrated for service (such as the Holy of Holies, the Church, Jerusalem). As I mentioned above, it’s the term most often used by St. Paul when he spoke about believers (see Romans 15:25; 16:15; 2 Corinthians 13.12; Ephesians 3.18; Philippians 4.22; Colossians 3.12-13).

In the modern Church, typically, we only use the term “saints” to describe those who have been officially canonized by the Church, but that doesn’t fully represent the rich reality we call “the communion of saints.”

The Communion of Saints

From childhood, most Catholics have recited the Apostle’s Creed which professes our belief in the communion of saints, but if you asked an average Catholic who that included they would most likely point to a statue at the front of the Church or a luminous figure in a stained glass window. It’s less likely that they will direct you to Harold in the third pew from the back. That’s unfortunate. Listen to what the Catechism says about the communion of saints: it is “the unity in Christ of all the redeemed, those on earth and those who have died” (Catechism of the Catholic Church, glossary).

So, when we profess this line in the Apostle’s Creed we are also speaking about ourselves. It’s not just the “super-Christians” we see celebrated in paintings, statues, and stained-glass—it’s us! We may not ever be comparable to St. Mother Teresa of Calcutta, but we are equally set apart and consecrated for God’s service. I sometimes say we are small “s” saints on the way to becoming big “S” saints. Another way of speaking about it is we are “saints in process.” God willing, we will become “saints in perfection” when we reach our heavenly homeland.

The Intercession of the Saints

Because the communion of saints is a communion of persons, we share a vital relationship with the big “S” saints. The Saints want us to be where they are now. As God’s closest friends, they desire what he desires, for “all men to be saved and to come to a knowledge of the truth” (1 Timothy 2:4). While as a Baptist minister, I used to chafe at the suggestion of praying to saints (confusing prayer with worship), I now see it as actually one of the most biblical and reasonable things we believe as Catholics.

I’ve had the fortune to travel to Greece, Turkey, Jordan, and the Holy Land with several groups of evangelical college students preparing for ministry. Once they discover I’m Catholic, the questions (and challenges) start coming in rapid fire. Often it begins with a mistaken understanding of our relationship with the Saints. So here’s how I talk with them about it. I ask, “Would you agree that we should pray for others and ask others to pray for us?” They all nod affirmatively (Sometimes I may share a Scripture or two about this, like Ephesians 6.18; Colossians 1:9; 4:3)”

I may also point out how we all know someone who is a real prayer warrior that we ask to pray for us. As James said, “The prayer of a righteous man has great power in its effects” (James 5.16). Then I continue, “The only difference between us is I believe when someone dies they don’t stop praying for us. To believe otherwise is tantamount to declaring that death is stronger than Christ; that death is more powerful than the unity which exists between Christ and all the members of his body; that death could somehow dismember his Body the Church. God forbid! St. Paul declared nothing “will be able to separate us from the love of God in Christ Jesus our Lord,” not even death (Romans 8.39).

As an aside, I was recently at a Funeral Vigil, and the prayers from that service stated it so succinctly, “My brothers and sisters, we believe that all the ties of friendship and affection which knit us as one throughout our lives do not unravel with death.” Later the Rite continues, “But for those who believe in your love death is not the end, nor does it destroy the bonds that you forge in our lives.”

I conclude with my evangelical friends, “So, just as I ask another person on earth to intercede for me in a difficult situation, I know I also have access to the full family of God in heaven to intervene on my behalf as well. How do I speak to them? By prayer (which simply means to make a petition or request). Prayer is not worship, but spiritual conversation. We aren’t “conjuring the dead” but engaging with beings which Jesus clearly declared are alive in God (Matthew 22.32-35).”

Invariably, the young Christians will say, “I’ve never thought of it that way,” “It actually makes a lot of sense,” or “You’ve given me a lot to think about.” At the very least, we can dispel wrong-headed notions non-Catholics may have and plant a seed in their hearts to consider this great gift of our faith.

So on this feast, let us praise the Father for giving us such a life-giving heavenly family all ordered toward our salvation and union with him. Ask for the opportunity today to share with someone the treasure and powerhouse of prayer we call “The communion of saints.”

What Does the Bible Say about Praying to Saints? [Dr. Edward Sri podcast]