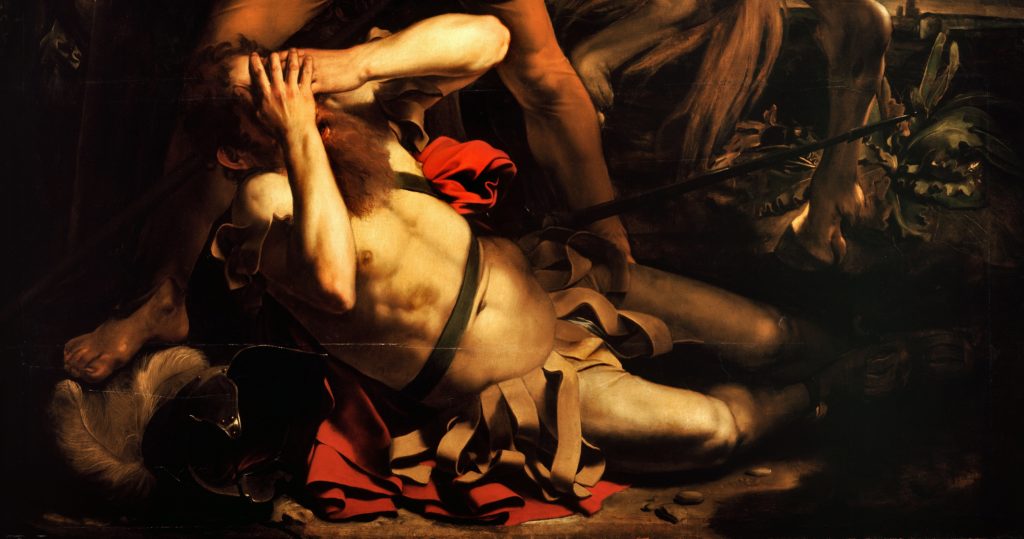 Paul’s letter to the Romans has been at the center of controversy, conversion, and reflection since the days it was written. The accolade of greatest theologian of the early Church is usually a toss-up between St. John the Evangelist and St. Paul. His letter to the Romans is no doubt St. Paul’s crown jewel. As we’ll see, by the time he writes this letter, he would have been preaching the gospel for at least a decade or more.

When and Where Did Paul Write Romans?

After encountering the Risen Jesus on the road to Damascus (see Acts 9:1-9), St. Paul famously traveled the known world on three missionary journeys, sharing the gospel of Jesus Christ with Jews and Gentiles alike. His first missionary journey (circa AD 46-49) takes him through central Asia Minor (modern-day Turkey); in his second journey (circa AD 50-52), he returns to this area and pushes into Greece; and his third missionary trip (circa AD 53-58) revisits all of these same areas.

At the end of this third missionary journey, he spends three months in Greece (see Acts 20:2-3). At this point, he is preparing to return to Jerusalem with aid from the Gentile churches for the Christians in the Holy Land (see Romans 15:25-26). Paul expresses his intent to get back to Jerusalem by Pentecost (see Acts 20:16), which is a pilgrimage feast in late spring. He wrote to the church in Rome during this three-month stay in Greece (likely from Corinth) toward the end of his third missionary journey, in late 57 or early 58 AD. Paul had previously spent a year and a half in Corinth during his second missionary tour with the fledgling Christians there (see Acts 18:1, 11). This three-month stay at the end of his third missionary journey would have afforded him time to compose this monumental letter.

Why Did Paul Write Romans?

By the end of Paul’s third missionary journey, he is returning to Jerusalem with aid for the church there (Romans 15:25-26)—aid which comes mostly from the Gentile churches of Asia Minor and Greece. For Paul, this aid is not just about alleviating material suffering. Rather, it is deeply symbolic of the newfound unity that Jews and Gentiles now have in Christ. For Paul, then, it’s fitting that since the Gentiles have come to share in the spiritual blessings of Israel, the Gentiles should assist their Jewish Christian brethren with material aid (see Romans 15:27). Since Paul had never been to Rome (and did not found the church there, see Romans 1:10), he may be hoping that the Roman Christians would likewise participate in helping out the church in Jerusalem.

Secondly, Paul expresses his hope to take his missionary work west, all the way to Spain (see Romans 15:28). He may have hoped to utilize Rome as a basis from which to launch his western mission.

Thirdly, and perhaps most importantly, Paul seeks to navigate Jewish and Gentile relations in the New Covenant. From our end, it is virtually impossible to underestimate how revolutionary it would be for Jewish Christians to come to grips with the fact that the ceremonial/ritual aspects of the law of Moses are no longer necessary for salvation. When the Temple was finally destroyed in AD 70, it was literally the end of a world—the end of the Old Covenant world; henceforth, there would be no more Levitical priesthood, no more sacrifices, no more mandatory pilgrimages to the Jerusalem temple.

Do you want to know how to answer the question “Are you saved?” Watch this video where Dr. Swafford further explains God’s gift of salvation.

Of Jews and Gentiles

This situation was exacerbated when Emperor Claudius expelled the Jews from Rome in AD 49. This would have expelled Jewish Christians as well, in which case the composition of the Church would have become more predominantly Gentile. When this decree expired with Claudius’ death in AD 54, some Jewish Christians would have returned. Consequently, the demographics of the church in Rome may have moved significantly in the intervening years from a church with a significant Jewish background to one of a more primarily Gentile background.

If Jewish Christians returned after Claudius’ death, this return to a more mixed Jewish and Gentile church may have caused difficulties and tensions. Priscilla and Aquila, whom Paul met in Corinth seem to be an example—since they were of a Jewish background and expelled from Rome by Claudius (Acts 18:1-4), and yet they had returned to Rome by the time of Paul’s writing since he greets them explicitly (see Romans 16:3, “Prisca” is short for “Priscilla”).

While the issues of Jewish and Gentile unity in Christ show up throughout the letter, they are pronounced in a practical way in Romans 14:1-15:13, where Paul explicitly addresses issues of Jewish calendar and Jewish sensitivity regarding food laws, as well as food sacrificed to idols. As prominent Pauline scholar, Michael Gorman, put it:

“The combination of food and calendar observance, together with the naming of the ‘circumcised’ and Gentiles (15:9-12), strongly suggests that the groups here are divided along Jewish and Gentile leanings” (Apostle of the Crucified Lord, 465).

Presumably, a combination of all three reasons are at play in Paul’s motivation for writing to the Roman Christians. He seems to have known lots of people there, as is manifest by the numerous contacts he references in Romans 16. In other words, while he had never visited the church in Rome, he seems to have been very well acquainted with the pressing issues of the day for the Roman church.

In chapters 1-2, Paul speaks of the “gospel … promised beforehand” (Romans 1:2); the universality of sin (see 1:18-2:24), and the “obedience of faith” (1:5). Paul would never have said that he changed religions: rather, he came to see Jesus as the fulfillment of the story of Israel—a fulfillment which inherently includes the gathering of the Gentiles, in the worship of the true and living God. This is at the heart of the “gospel” of which Paul speaks. This gospel answers to the deep problem of sin, which affects all of humanity—both Gentiles (see Romans 1:18-32) and Jews (see Romans 2:1-24).

The answer to the universal human plight (i.e., sin) is the universal salvation offered in Jesus Christ, accessible through faith. But faith, for Paul, is not merely a matter of belief; it includes obedience and is perfected in good works which are necessary for salvation (see Romans 2:6, 13).

In Romans 5-6, Paul turns again to the universality of sin, drawing a parallel between Adam and Christ: in Adam all share in the predicament of sin and the curse of death; but in Christ, all find life.

The question for the reader by the end of chapter 5 is how do I get out of the Old Adam and into the New? Paul’s answer is baptism:

“Do you not know that all of us who have been baptized into Christ Jesus were baptized into his death? We were buried therefore with him by baptism into death, so that as Christ was raised from the dead by the glory of the Father, we too might walk in newness of life” (Romans 6:3-4).

That is, baptism incorporates us into the Paschal Mystery—into the life death and Resurrection of Jesus Christ.

In Romans 7 and 8, Paul continues meditating upon the true gravity of sin (see 7:15, 17, 19-20) and the glory of the gift of the Spirit (see 8:14-17). Salvation is about being born anew in baptism and maturing as a child of God through the power of the Spirit—in order that we may be conformed to the image of Jesus Christ (see 8:29).

In chapters 9-11, Paul looks in awe at how God has fathered his people throughout salvation history, how he has brought the Gentiles and Jews together into one family in Christ, through the power of the Spirit.

In Romans 14:1-15:13, one of Paul’s concrete motivations for writing is on display—namely, to navigate Jewish and Gentile relations in the New Covenant.

The end of chapter 15 returns to the immediate context of Paul’s writing—his desire to get to Spain (15:24); his bringing Gentile aid to the Christians in Jerusalem (15:25-26); and his emphasis on how deeply fitting and symbolic this act of charity really is (see 15:27). Here, Paul is keenly aware of the danger that awaits him in Jerusalem (see 15:31).

In chapter 16, Paul commends Phoebe who may have been the one to deliver the letter and perhaps help explain its contents (see 16:1); he also offers several greetings to people of the Roman church (e.g., Prisca and Aquila, 16:3).

Paul returns at the very end of the letter to the phrase “obedience of faith” (16:26), which forms a bookend to his teaching here and at the beginning of the letter (1:5). For Paul, “faith” is better described as faithfulness— “faith working through love,” as he puts it in Galatians 5:6—or even allegiance to the divine king, leading to a life transformed by the power of the Spirit. Our holiness is a matter of the divine life surging through us (see Galatians 2:20); but we truly participate and cooperate with the unfolding of this divine life within us—that is, we truly have a role to play in the Spirit’s on-going transformation of our life.

The Rest of the Story

He seems to have been released and eventually made his way to Spain. Eventually, he is arrested in Rome again and beheaded around AD 67 under Emperor Nero. His mortal remains now lie under the altar of the Basilica St. Paul Outside the Walls.

Shortly before his death, he penned these majestic words:

“For I am already on the point of being sacrificed; the time of my departure has come. I have fought the good fight, I have finished the race, I have kept the faith” (2 Timothy 4:6-7).

May we be inspired by this apostle who had the courage to follow Jesus and preach the gospel to the very end!

How to Explain Salvation to a Non-Christian

About Faith: What St. Paul Said and Didn’t Say in Romans

Romans: The Gospel of Salvation