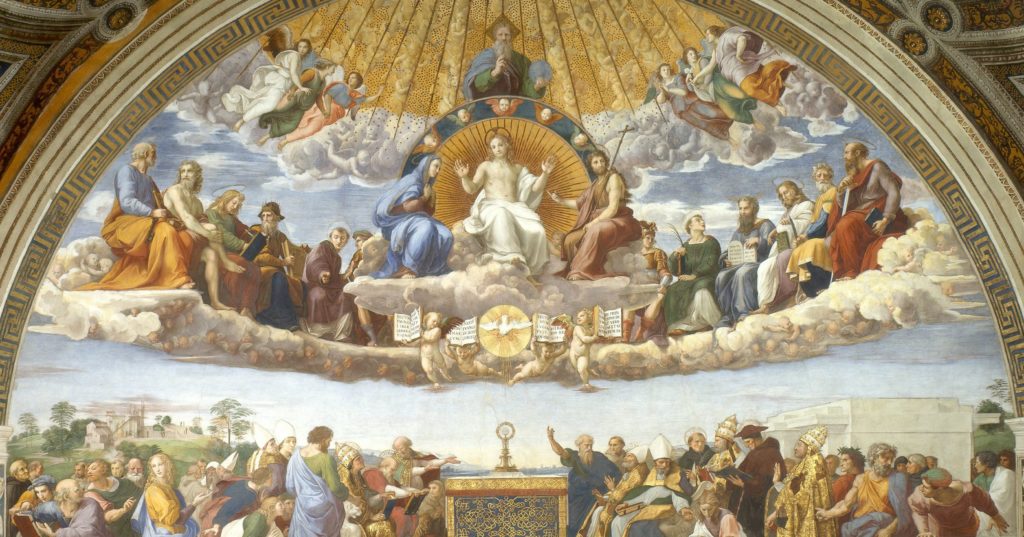 The feast of Corpus Christi (Body of Christ) celebrates the real presence of Jesus in the Eucharist, his Body and Blood, Soul and Divinity. This feast represents something of a high point, drawing out and celebrating the full force of the Paschal Mystery: Jesus defeats death and sin and rises to new life on Easter Sunday; after his ascension, he and the Father send the Holy Spirit (see John 15:26; 16:7) at Pentecost, followed by Trinity Sunday and then Corpus Christi.

The Trinity is the eternal communication of the divine nature from Father to Son, and through the loving embrace of Father and Son, the Holy Spirit proceeding forth from them both. This is the immanent Trinity, God’s own inner life from all eternity.

The economic Trinity concerns God’s going outside of himself, in his works of creation and redemption. In the Paschal Mystery, we see the sending of the Son and the Spirit, which extends and prolongs these internal processions within God into time (see Scheeben, Mysteries of Christianity, 481). The sacraments, quintessentially the Eucharist, make present the Paschal Mystery and bring us up into this inner dynamic of life and love.

Thus, the Paschal Mystery is never locked in the past, but exists in the ever-present—especially in the Eucharist, so that the entire people of God can be offered up to the Father, “through him, with him, and in him.”

Let us now take a look at the Eucharist through the biblical lens of the manna and Holy of Holies.

God liberated Israel from Egypt in the Exodus, but for life in the Promised Land. The manna is precisely that food for the journey that sustained Israel after the Exodus, en route to the Promised Land. And in fact, the manna ceased when the Israelites finally arrived (Joshua 5:12). Keep in mind that the manna was no ordinary bread, but “bread of angels” (Psalm 78:24-25) which miraculously fell daily—(a point that may lie behind the petition “Give us our daily bread,” (read Brant Pitre’s Jewish Roots, 93-7). Jesus clearly stated that this ancient manna foreshadowed the Eucharist, announcing the superiority of the latter:

“Your fathers ate manna in the wilderness, and they died. This [the Eucharist] is the bread that comes down from heaven, so that one may eat of it and not die” (John 6:49).

We also find a similar link between Jesus’ multiplication of the loaves and the Last Supper: the same four verbs in Greek recur (lambano [take/took], eulogeo [blessed], klao [broke], didomi [gave]) (Matthew 14:19; 26:26). In fact, there is a Church at Tabgha on the Sea of Galilee dating back to the fourth century, which marks the site of the multiplication of the loaves; in this Church, there is a Mosaic with only four loaves of bread (not five, as in the story in Matthew 14:17); the point is clear: the fifth one is on the altar! Clearly, these fourth-century Christians and the Gospel writers viewed the multiplication of the loaves as prefiguring a greater miracle to come, namely, the Holy Eucharist.

Wherever the King is, there is the Kingdom; and in the Eucharist, the King is present—as is his Kingdom. Jesus won’t have one ounce more glory at the end of time than he does right now in the Eucharist; the difference will only be in our ability to see.

If you enjoyed this blog post, you’ll love Dr. Swafford’s Great Adventure Bible study on the book of Romans! Get it here!

Acts 2: Rush of a Mighty Wind

He Ascended into Heaven

A Biblical Walk Through The Mass

Dr. Andrew Swafford is associate professor of theology at Benedictine College. He is general editor and contributor to The Great Adventure Catholic Bible published by Ascension, and host of the Bible study Romans: The Gospel of Salvation (and author of the companion book), also by Ascension. Andrew is author of Nature and Grace, John Paul II to Aristotle and Back Again, and Spiritual Survival in the Modern World. He holds a doctorate in sacred theology from the University of St. Mary of the Lake and a master’s degree in Old Testament & Semitic Languages from Trinity Evangelical Divinity School. He is member of the Society of Biblical Literature, Academy of Catholic Theology, and a senior fellow at the St. Paul Center for Biblical Theology. He lives with his wife Sarah and their five children in Atchison, Kansas. Follow him on Twitter: @andrew_swafford.

This article first appeared on The Ascension Blog’s former home, The Great Adventure Blog, June 4, 2015. It was updated on June 11, 2020. For more information on Ascension Catholic Bible studies and resources, click here.

The Despair of Judas versus the Sorrow of Peter: A Lifesaving Difference
In Revelation, Mary Embodies the Church
Small Groups: An Ancient Idea for a Digital Age
The Importance of Christian Community
Has Ascension's free media strengthened your faith?
You can now offer ongoing support for this content with a recurring gift.
Support Ascension