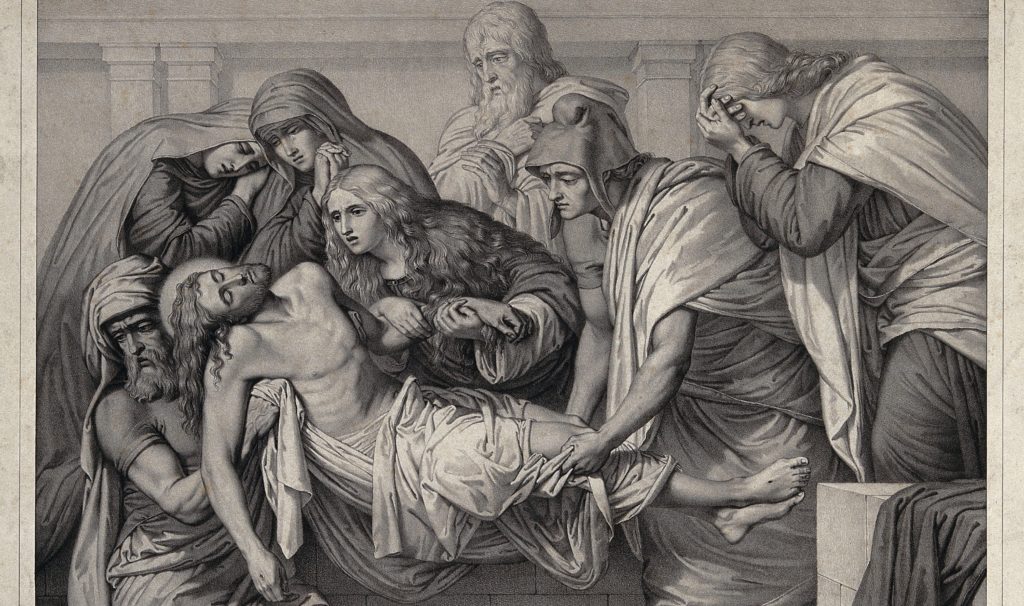 Growing up as a Baptist, we celebrated an annual event called “revival.” Usually during a week of summer evenings, revival was a days-long marathon of sweltering, deafening, outdoor hell-fire and brimstone preaching services designed to fan into flame dimly burning wicks of faith.

I still see the yard and church signs for revivals around here in the summer, and I always fantasize about walking into those earnest churches on an evening and sharing a tearful Catholic testimony on Lent and Holy Week when I do.

It’s not that non-Catholics can’t appreciate Holy Week, it’s just that there’s little preparation for or experience of it; the whole focus is on the one Easter Day celebration.

Until the movie The Passion of the Christ, no one I knew spent as long as two hours and six minutes, straight, contemplating the horror of Good Friday. Certainly I had not.

My first Lent and Holy Week were in anticipation of being received into full communion with the Church, and it was the most profound revival of my life. I had never even heard of Lent before that.

I hadn’t ever thought to question the ancient roots or the “why” of the ubiquitous existence of Fillet-O-Fish sandwich commercials each spring, much less fully participated in, or even really considered or adequately appreciated the week-long events of Easter. There was talk and momentary consideration of crucifixion, but Easter deliberation mostly involved a new dress, hallelujah-resurrection corsages, bunnies, and egg hunts.

That first Lent began forty unfamiliar days of penitential consideration for me, complete with fasting, that led with perfect deliberation to a marathon week of sacred liturgies.

I zealously participated in every single event: casting my palm branch on the road for Jesus; anointing with Mary Magdalen and the Holy Spirit his tired, dirty feet under the ridicule of the apostles; witnessing Jesus bless the fragrant holy oil that would immanently anoint me in Confirmation; weeping as Jesus washed my proud, oblivious feet; watching The Passion movie in a writhing ball of grief. And then the long, hot wilderness trudging of Lent came to a deafening, shocking halt on Good Friday.

What a striking portent it is to call Good Friday “good.” When I arrived for Stations of the Cross on my first Good Friday, the sight of the covered crucifix sucked the breath out of me. In a sorry newbie spectacle, I wept and wept in the silent terror of that shrouded Cross and bare altar as though I were alone. Jesus was dead. The tabernacle was hanging open and empty.

No bells, no Mass, no light. After all the brutality of the Crucifixion, why was it a surprise that he was gone?

My mouth was full of the hot grit of an arid Lent, because everywhere else around me—right outside the doors of my church, right between the pews we knelt by—people carried on, trampling my grief.

How could people be whispering, fidgeting, driving? I could hear the cars sweeping by on the street outside. Millions everywhere were celebrating their day off, barbequing with a beer or headed out to dinner, listening to music, chattering inanities, imbibing and stuffing and ignoring what was happening on this day, in that moment.

But for me, all of time had stopped as in an apocalypse. Nothing would ever be the same. For forty days my heart had been stalked and now was gripped, squeezed painfully in the palm of a black “moment” called Good Friday.

My spiritual eye groped for Mary and the other women and disciples. What has happened? I wanted to wail. What have we done? What do we do now?

Today, this Good Friday, God invites us to an annual “hard reboot”—a spiritual, emotional, and intellectual revival. I once heard depression described as a “hard reboot” of the soul, because it is a protracted emotional full-stop, a spiritual “tomb” if you will, meant to draw the human psyche into death and pain in preparation for a new future.

Sin is real. Consequences are inevitable. Agony is certain. Death will occur. God allows, even embraces, these inescapable realities. Take whiff of death’s evil breath with him.

What possible response could mortal flesh offer in the face of such a mystery, but silence?

Each depressing hour of Good Friday is an echo of the unique and incomparable suffering of our dearly beloved Savior. Every minute is meant to make us quiver under the full picture of our redemption and bring us to our knees in participation of the great, billowing silence of heaven, where before God’s majesty we lose our words, and something unspeakable happens.

In purposely plunging into the deep, silent darkness of Good Friday, we “rediscover the sense of God.” To embrace the mid-day darkness of this mourning is to find oneself wrapped in the silent intimacy of God’s presence.

The Synoptic Gospels all speak of the sun being darkened during the Crucifixion, just before Jesus died. Fixed and open on the Cross, the darkness concealed Jesus from noon to three in the afternoon of that first Good Friday. My whole life I heard this darkness interpreted as God’s abandonment, yet how could that be so?

I suspect, rather, that Jesus was surrounded in, with, and by God, so that the darkness was a veil that protected the mystery:

Similarly, silence is the “sonic veil that protects the mystery,” according to Cardinal Robert Sarah. In an interview about his book, The Strength of Silence: Against the Dictatorship of Noise, Cardinal Sarah said:

“God is silence, and the devil is noisy.”

“mystery continually veils itself, covers itself with silence, in order to avoid constructing an idol in place of God.”

Why is Good Friday silence so difficult? Because it confronts our idols.

“With its festive appearance, noise is a whirlwind that avoids looking oneself in the face and confronting the interior emptiness. It is a diabolical lie. The awakening can only be brutal.”

Entering into the Divine Mystery

Our modern world is starving for silence. We are “victims of the superficiality, selfishness, and worldly spirit that are spread by our media-driven society.” We must:

“enter into silence; without it, we are in illusion. The only reality that deserves our attention is God himself, and God is silent. He waits for our silence to reveal himself.

“Regaining the sense of silence is therefore a priority, an urgent necessity.

“Silence is more important than any other human work. Because it expresses God. The true revolution comes from silence; it leads us toward God and toward others so that we can place ourselves humbly at their service.”

Silence, then, is not a pause between two rituals; it is itself fully ritual. As Vatican II stresses, silence is a privileged means of promoting the participation of the people of God in the liturgy; in silence lies entrance into the divine mystery.

We must enter into the great silence of the Good Friday “liturgy.” To struggle against this dark silence, to push it away or refuse it, is to refuse God himself.

The “Good” in Good Friday

Today, let us allow the awful silence of Good Friday to reign and put to death all that must die. May we welcome the disturbing interruption and halt of our activity and lean into the dark, silent death of this day, without abandoning Jesus and hurrying to the resurrection Vigil in our hearts.

Perhaps I should take advantage of my day off from work by turning off the “dictatorship of noise” pinging and swooshing from my cell phone. Maybe I can secretly bow my heart in prayer at every fifteen minute mark. Possibly I can forgo supper and feast instead on the Stations of the Cross. Maybe I can kiss his sacred feet in veneration of his deposition from that terrifying throne.

May we discipline our eyes to remain, today, on the gaping black mouth of the tomb and consider that it will take us too. Like the wise thief, let us observe the mystery and lamentation of these royal hours with bowed heads.

As my first Catholic Good Friday experience proved, it is not annual familiarity that fosters intimacy or revival. Let us resist the temptation of familiarity this Good Friday and accept the Church’s invitation to blatant, solemn mourning. In so doing, I put the “good” in Good Friday for myself and maybe those around me, too.

Because only from the dark depression of death can a true revival spring. It’s only because of Good Friday that the tomb can become a womb.

Why Do We Call It ‘Good’ Friday?

The Day God Died: A Reflection on Good Friday and the Crucifixion

Good Friday: The Meaning of the Cross (video)

Sonja Corbitt is an accomplished author and broadcaster who produces high-impact, uplifting multimedia Bible studies. A North Carolina native who was raised as a Southern Baptist, Corbitt converted to the Catholic Faith and is in formation as a Third Order Carmelite. She is the host of the Bible Study Evangelista Show, a writer for the Ascension Blog, a contributor to Magnificat, and bestselling author of Unleashed, Fearless, Ignite, and Fulfilled: Uncovering the Biblical Foundations of Catholicism. Her most recent book is How to Pray Like Mary published by Ascension.

This article is an updated version of an article posted on The Great Adventure Blog on April 13, 2017.

Featured image: Christ is laid into a tomb. Lithograph by M. Fanoli after E. H. Wehnert, 1849. Sourced from Wikimedia Commons.

Saul, the Price of Disobedience
The Day God Died: A Reflection on Good Friday and the Crucifixion
The Wonder of Woman
A Lesson from the Cherubim: Sing When It Hurts
Has Ascension's free media strengthened your faith?
You can now offer ongoing support for this content with a recurring gift.
Support Ascension