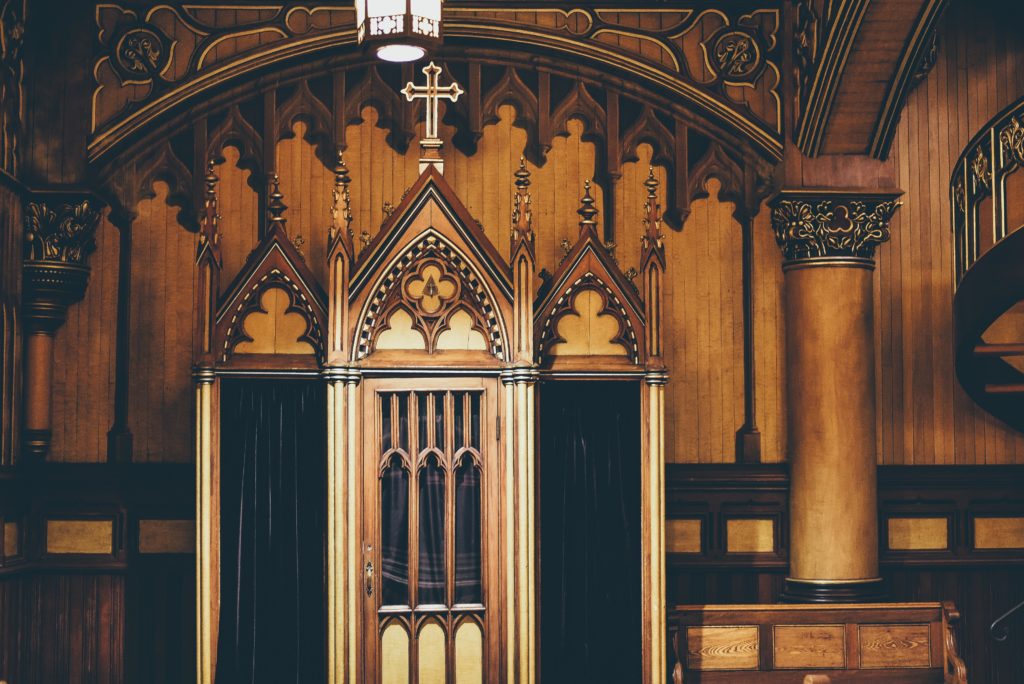 “This is wrong,” the voice in my head told me. “Don’t do it.” I didn’t listen to that voice. I did it. Then I regretted it. I didn’t have to tell that story about that person the way I did. There were other, kinder options, including just keeping my mouth shut. I could have chosen one. I didn’t. I knew I should go to confession, but I didn’t want to.

“Do people really commit mortal sins?” I asked a couple priest friends. They answered quickly and emphatically “Yes, all the time!” As I got into my car that sunny Friday morning I realized with a jolt that I’d just committed one. I bore false witness against my neighbor; I gossiped, and I was planning to attend Mass later that morning. I was annoyed. I was annoyed I’d had that conversation with the priests. I was annoyed that I hadn’t listened to that all important nudge from the Holy Spirit and I was annoyed because I knew that being in that state of sin, I could not receive Communion that day unless I could get to confession first. The satisfaction of telling that story rapidly wore off. I also realized that if I crashed my car on the way home and died, things might not go well for me.

No Confession, No Communion

Mortal sin is a big deal. Catholicism for Dummies states it well:

“The Church doesn’t see the Ten Commandments as arbitrary rules and regulations from the man upstairs but as commandments for protection. Obey them and eternal happiness is yours. Disobey them and suffer the consequences.” (Yes that is a real book and it has the nihil obstat and imprimatur.)

For a sin to be a mortal sin it must meet three criteria: it must be a grave matter, the person doing it must know that it is sinful and the person must freely choose to commit the sin.  Check, check, and check. No Communion for me.

A priest I know was able to hear my confession but it was going to be after Mass. Abstaining from receiving our Lord during Mass was harder than I expected and I’d be lying if I said I wasn’t tempted to go to Communion despite the situation. I stood up, let my friends out of the pew and knelt back down. The best part of the Mass was going on and I was missing it and I had no one to blame but myself.  I was warned, but I didn’t heed it. I was sad that I couldn’t partake.

Sin Damages Our Relationship with God

I was grateful to go to confession that day and be reconciled back to our Lord. I am thankful for his constant mercy and ready forgiveness. It hasn’t always been like that.

For many years I avoided confession. It scared me. Just thinking about it made my heart beat faster. The idea of telling someone what I’d done wrong made me uncomfortable. Who likes to admit messing up? Maybe if I pretend it never happened, it will be as if it never happened.  Sometimes things we ignore go away.

Sin is not one of those things.

A number of years ago when Jesus started working in my heart and I started letting him, I participated in a small faith group. I had a persistent feeling I should go to confession. I tried pushing it aside, but the Holy Spirit is stronger than I am. I had been praying to grow closer to Jesus and this was a necessary part of that.

Being Certain of Forgiveness

Confession is offered every Wednesday night at a local parish but I was a wizard at coming up with reasons not to go: I want to be with my family. I’m tired. It’s dark outside. They were weak excuses to cover up my fear of the sacrament of reconciliation. The nagging feeling didn’t go away so I announced to my group that I was planning to go. I asked them to ask me about it the following week. I needed to be held accountable because I didn’t trust myself.

That evening I showed up at 7 PM. The church was dimly lit, the music was relaxing, and there was an overall sense of peace. It was a sanctuary. I was terrified. As I waited in line, my hands were shaking and if it wasn’t for my desire to not admit failure to my fellow group members, I would have left. It was finally my turn and I slunk over to the pew.  I admitted that I did not know what to say and that it had been a long time since I had been to confession. The priest was gracious and welcoming. He listened carefully and I did not feel uncomfortable or judged. He assured me that God can handle whatever I had.

After absolution, when I went to a pew for my penance, a feeling of relief sprinkled over me. I knew in my head and heart that it was OK. I was forgiven. The tears started and then gushed out. I held my head in my hands and they dripped through my fingers. Being certain of forgiveness and mercy was amazing. I felt clean and free.

Afterward I came to better understand the importance of this difficult sacrament. There is something transcendent in admitting my faults out loud. It requires that hard-to-come-by virtue of humility.  It means I have to be vulnerable and raw. I have to unite myself with Christ on the cross. It wasn’t until I started going to confession regularly that I began to understand what it meant that Jesus died for our sins.  It wasn’t just the sins of the people back in his day. God is outside of time, so he also died for our sins, for my sins, so we can be forgiven and saved and one day spend eternity with him, not separated from him. As I’ve prayed more and learned to love Jesus more, I’ve grown in the desire to not hurt him.

Whether reflecting on the Sorrowful Mysteries, listening to the Passion on Palm Sunday or watching Mel Gibson’s movie The Passion of Christ, the depth of Jesus’ suffering is revealed to me, the agony and torture he endured, the brutality of his experience, all accepted because of his great love for each of us. Imagine a love that great. Those who are parents get a taste of it, but God’s love for us is even bigger. When I frame it like this I start to see that the heart palpitations and slight feeling of nausea that can accompany walking into the confessional are tiny compared to what Christ experienced for me. I also am reminded that confession wasn’t created to make me feel bad, but to free me. God loves me so much that he wants my soul to be as clean as possible when I come to him. He wants to forgive me and shower me with love. All he asks is that I tell him I’m sorry.

When I started looking at confession as an opportunity to reconcile myself to the God I love, it stopped being a burden and became a blessing. It’s not a get out of jail free card but it is a fresh start. We forgive those we love. How much more happy is God to forgive us. He doesn’t get tired of it.

“If you then, who are evil, know how to give good gifts to your children, how much more will the heavenly Father give the Holy Spirit to those who ask him!” Luke 11:13

Had I just thrown an “I’m sorry” up to God, it wouldn’t have been the same.  By being denied him at Mass, I felt the pain of hurting the One who suffered and died for my salvation. It was hard telling the priest what I did, but it was worth it. I know without a doubt that God has forgiven me. My soul is tidy again and on Sunday when I go to Mass I will appreciate Jesus’ sacrifice even more.

Why You Should Go to Confession

A Friar Goes to Confession

Merridith Frediani’s perfect day includes prayer, writing, unrushed morning coffee, reading, tending to dahlias and playing Sheepshead with her husband and three teenagers.  She loves leading small faith groups for moms and looking for God in the silly and ordinary. She blogs and writes for her local Catholic Herald in Milwaukee.