Today’s reflection covers a very difficult application of a very simple commandment.  Exodus 20:13 states “You Shall Not Kill.” In light of this, we received a question from someone who served in the Navy and asked “Is it a sin to kill in war?” For this we will rely on several paragraphs, all contained in Part Three, Section Two, Chapter Two, Article Five of the Catechism of the Catholic Church.

To begin with, what does the Church teach about war itself?

“The fifth commandment forbids the intentional destruction of human life. Because of the evils and injustices that accompany all war, the Church insistently urges everyone to prayer and to action so that the divine Goodness may free us from the ancient bondage of war. All citizens and all governments are obliged to work for the avoidance of war. However, ‘as long as the danger of war persists and there is no international authority with the necessary competence and power, governments cannot be denied the right of lawful self-defense, once all peace efforts have failed’” (CCC 2307-2308).

In other words, war itself, because of the evil arising from it, must be avoided, if at all possible, but sometimes nations find themselves in situations where war is forced upon them. This Article Five from the Catechism also discusses the “Just War Doctrine,” which governs how and when nations may take part in a war. However, this could (and, at some point probably will) take up an entire blog article on its own; in the interest of remaining relevant to the question at hand, we will focus on acts involving individuals.

First, let us look at the relationship between service members and their country. Those called to serve have responsibilities, and must examine their conscience. Paragraph 2311 of the Catechism tells us:

“Public authorities should make equitable provision for those who for reasons of conscience refuse to bear arms; these are nonetheless obliged to serve the human community in some other way.”

The rights and responsibilities of conscientious objectors must be balanced. A heroic example of this could be found in stories like that of Desmond Doss in World War II, a pacifist who wanted to help the United States’ efforts, but refused to take up arms, and so served as a medic. His tale is told, if graphically, in the film Hacksaw Ridge. Mature readers (the film is rated R, and deservedly so) not bothered by intense battle scenes may find this story of Doss’ life inspirational. 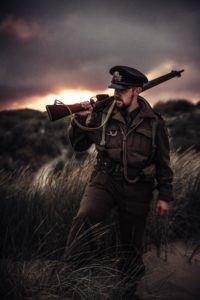 But presuming one finds oneself enlisted and armed, what do their responsibilities entail?

“The Church and human reason both assert the permanent validity of the moral law during armed conflict. ‘The mere fact that war has regrettably broken out does not mean that everything becomes licit between the warring parties’” (CCC 2312).

Thus, even in a just war, there is no freedom to take an “anything goes” mentality. Nations should not deploy their arms or troops in such a way as to unjustly or disproportionately cause more harm than is required. Individuals, also must take this responsibility seriously. The fact that they may be involved in a war does not give them the right to mistreat civilians or captured prisoners.

One of the most important sentences giving context to the question at hand comes from paragraph 2310:

“Those who are sworn to serve their country in the armed forces are servants of the security and freedom of nations. If they carry out their duty honorably, they truly contribute to the common good of the nation and the maintenance of peace.”

This sums up the duty of the individual soldier. The duty of a soldier involves a paradox: to contribute to the common good, they are required to take actions which in other contexts seem evil. Those in the service know there may come a time when they must fight, and possibly kill. This is not, in itself, immoral. Of course, as was mentioned above, any killings must be as limited as possible, and geared towards accomplishing the mission of the war. Nor is torture or inhumane treatment acceptable.

Also, the inclusion of the word “honorably” in the sentence quoted above provides context for both commanders and individual troops. Carrying out one’s duty does not give one license to act in an immoral manner, even if they are commanded to do so. Paragraph 2313 says:

”Actions deliberately contrary to the law of nations and to its universal principles are crimes, as are the orders that command such actions. Blind obedience does not suffice to excuse those who carry them out.”

If given a command to act immorally, there remains a moral obligation to not carry out that order. One example the Catechism mentions is genocide. But this would apply to any action that would lead to disproportionate or unjust results.

So to answer the original question, no, it is not inherently a sin to kill in war. But this doesn’t imply blanket acceptance, either. Some deaths may not be justified. It is possible that a person’s conscience reminds them of their actions during their time serving. Perhaps they wonder if they crossed a line. My advice in this case would be to talk to a priest. If they had crossed a line, this is why Christ gave us the gift of the sacrament of reconciliation. No sin committed by any of us, no matter how violent, is too great to repent of.

To the man who asked this question, and all who served, I thank you for your courage and pray that you may experience peace in the world and in your heart.

Close Encounters with Utilitarianism and Nationalism

Does God Command Evil Acts in the Bible?